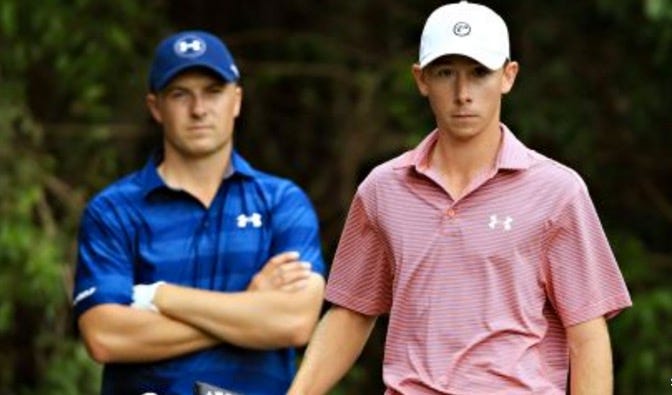 FOX – 22-year-old college senior Lee McCoy spent his Sunday walking around the Innisbrook Resort alongside Jordan Spieth, and shot a 2-under round of 69 to finish fourth at the Valspar Championship, just three strokes behind winner Charl Schwartzel.

McCoy, a Georgia Bulldog, was ineligible to receive his winnings for the finish, which means he had to turn down $292,800.

Spieth told McCoy on the course that he shouldn’t look at the payout list after his finish, but McCoy did anyway.

I guess your stance on this story all depends on your outlook on life. Like if you’re a positive person you’d probably say wow, this is awesome, this college kid Lee McCoy just went toe to toe with the best player in the world and beat him by 4 strokes, came out of nowhere to place 4th overall at the Valspar. Best showing by an amateur in 20 years. Spieth clapping and tipping his cap as the crowd chants his name. What a special moment for this 22 year old, what a bright future he has.

Or, if you’re more on the negative side, like me, you’d probably just kill yourself.

“I shouldn’t have looked. Lot of money. Lot of money,” McCoy said. “I think I got like $350 in my bank account right now, so it’s mostly gas money. It hurt, but there’s so much going great for me right now. I’m just trying to take it all in. Just really grateful to be standing there.” [NYDN]

Almost $300K! You busted your ass, you played the round of your life, you’re the talk of the internet (or at least Golf internet). And you walk away with a couple firm handshakes and hugs? Have to head back to your apartment in Athens and spend half your bank account on the gas to get there, and the rest on dinner and hopefully enough left over for some celebratory beers? How the hell do you see the bright side of leaving 300 grand on the table because of some stupid ass NCAA and PGA rules bullshit. Come on.

Very strange, to be this classy. Can’t really relate.

“I shouldn’t have looked. Lot of money. Lot of money. I think I got like $350 in my bank account right now, so it’s mostly gas money. It hurt, but there’s so much going great for me right now. I’m just trying to take it all in. Just really grateful to be standing there.”

“It’s really incredible to see a guy in his position to have that much class,” McCoy said. “At the end of the day, I’m still a little college scrub playing out here with these guys trying to fit in. The guy had nothing but great things to say and treated me like I really belonged out here. It’s pretty cool.”

“It was really cool to watch,” Spieth said. “You would have thought he was out here for years, working the ball both ways. The way he was talking, couldn’t sense any nerves or anything on his putting stroke, either. He’s certainly really ready to be out here. It was really fun to watch.” [NYDN]

If Spieth was really as cool as he seems he’d hit this kid with a nice solid under the table Venmo, or at the very least take him and his buddies out in Athens.