Big Cat Note – The guys at CWB Chicago do a great job compiling this stuff and run a year round site that you should check out. They also have a “tip jar” to help keep their site running. If you can spare a couple of bucks, they are what make this annual blog possible. You can also follow them on twitter here, @CWBChicago

Lets begin with a little fight on Lincoln to get us in the mood. Good news for the owner of that Sandwich shop, I think there has been 10 different tenants there in the past 5 years.

1:26PM — Dust off the ambulance. We have a female unconscious outside of Sluggers World Class Sports Bar, 3540 N Clark.

You know how every earthquake has an epicenter? Well that’s Sluggers on St Patrick’s Day. The perfect place for the first passed out person. Drunken debauchery starts at Slugger’s and spreads like a wave through the city. Thank God they have a bunch of metal bats on hand. 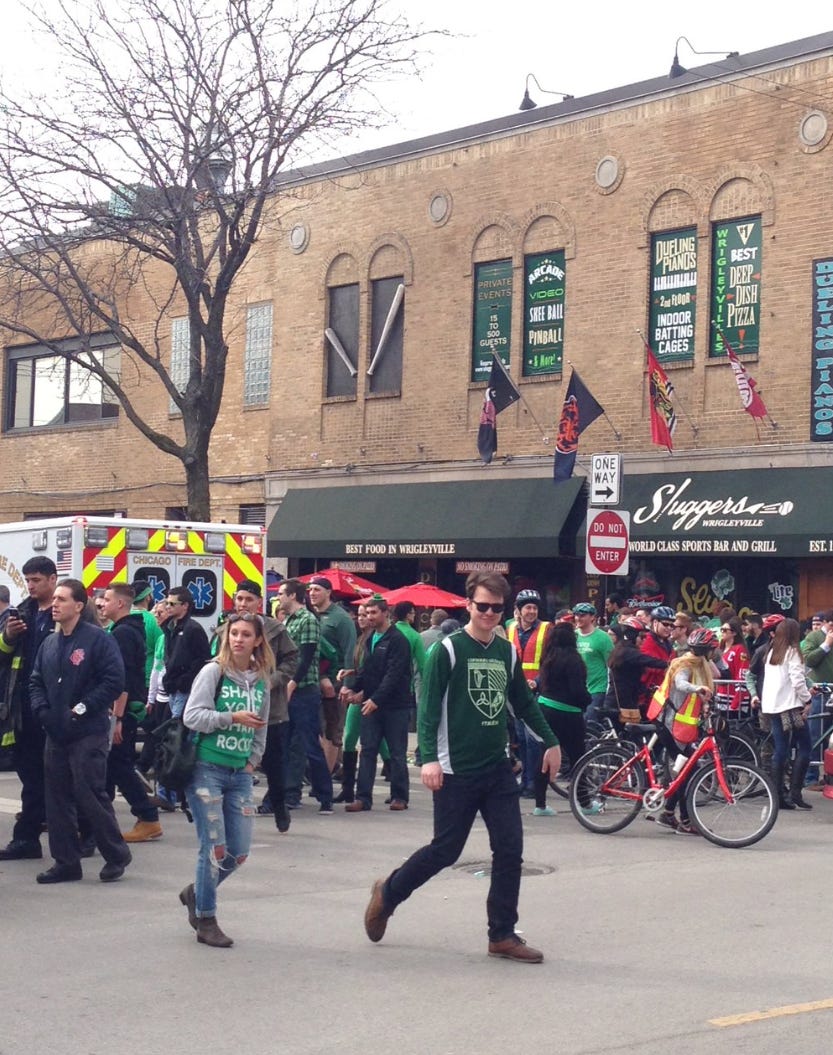 Our first “I’m calling the Cops and getting you arrested and my Dad is a lawyer and he’s going to sue everyone who works here” moment of the day. Always love these. Hope she tossed in a line about how she goes to College and the bouncers are just poor people.

I feel like St Patrick’s Day is the one day a year where public napping should be allowed. People get tired, as long as they’re not in anyone’s way, let them sleep.

2:45PM — Courtney says she was jumped at Roscoe and Clark. The offenders fled in an unknown direction. They were wearing green clothing.

Courtney 100% tripped and fell on her face. “I was mugged you guysssss, it was sooooo traumatizing”, a hungover Courtney recounts during Sunday’s mimosa brunch with the gals.

3:05PM — Burglary in progress. Security reports two white men in green sweatshirts have climbed to the upper deck of a parking garage north of Wrigley Field.

I like the added element of Wrigley being an enormous construction site right now. Really spices things up.

I’m taking a wild guess and thinking it doesn’t have to do with being gay and is probably because you’re black out drunk at 3 in the afternoon. Also who goes to that Subway when there’s that Mexican joint underneath the Red Line right across the street. Both places will give you diarrhea but at least the Mexican place serves gays.

This is the time in the day where people start dropping like flies. Just an absolute mish mosh of 20 year old’s that drank 15 car bombs between 9 am and 2 pm. Belly full of Guinness and Jameson. No feeling in the world like it, been there many times on St Patrick’s Day.

4:27PM — Broadway and Wellington for the drunk woman wrestling a cab driver in the street.

Can cab driver’s get PTSD? Because I feel like being a cab driver in Chicago on St Patrick’s day is quite possibly the world’s dangerous profession. It’s like Crab Fisherman, Forest Firefighters, and Cabbies on Clark street in early March. Not even a fight with a guy, dude got in a wrestling match with a chick. No one is safe.

6:32PM — Two calls from the Hidden Shamrock, 2723 N Halsted. One caller says a patron tried to steal a beer. The other caller says someone’s threatening to shoot people inside the bar. The first caller was right.

Hidden Shamrock is the single hottest bar in the City, not talking about attractiveness, talking about literal heat. They keep that joint at like 87 with a fire burning all winter long. I’d shoot someone too.

Bro, the one day in the year where you can basically get away with any crime as long as you’re wearing some form of green. This is like a reverse where’s waldo. A sea of white people in green shirts and you’re the tall black guy wearing red. Come on, be a better mugger on St. Patrick’s day.

8:00PM — An Amazon Prime driver rings a doorbell in the 3900 block of Fremont to deliver a package. The drunken customer responds via intercom that he’s going to get his gun and come downstairs. Mr. Amazon Prime runs away and calls police.

So many phantom guns.

Drunk male is so redundant on St. Patrick’s day. Just say male, the drunk is implied.

8:34PM — There’s a man down with broken ribs after being beaten in a parking lot at Clark and Grace. He’s transported to Weiss Hospital.

9:14PM — Dispatcher: “Clark and Racine. We got multiple calls of a man screaming for help and neighbors yelling at him to shut up.”  Cop: “Yeah. That was our guy with the broken ribs.”

Perfection. Guy is howling for help in utter agony while everyone tells him to shut the fuck up, trying to work off my morning buzz and rally for the night.

9:28PM — Fire’s rolling for a 32-year-old man who’s having heart trouble after eating a pot brownie. Cornelia and Lakewood. 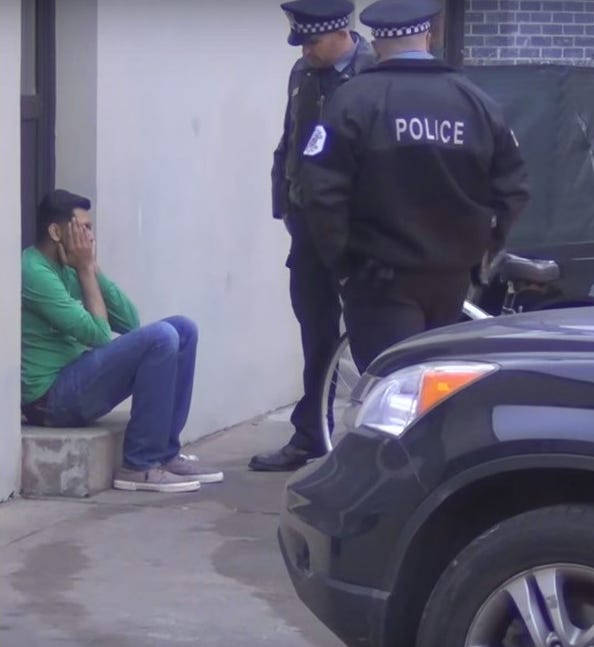 9:48PM — Dispatcher: ”If anybody’s near Clark and Irving…a concerned citizen says two intoxicated male whites are fighting and one of them is losing.”

It’s not the fighting that is the problem, it’s the fact that it’s not a fair fight. Such a bizarre sense of morality, love it.

10:13PM — Michael called 911 to report that his friend Bridget is lost near Addison & Clark. She’s blond and wearing a green shirt.

10:14PM — Now a woman is calling to report that Bridget has either gotten lost or, alternatively, roofied.

There it is! The girl who drinks too much and then tells everyone she was roofied.

“I’ve been taking shots of fireball since 9 am, I can drink any guy under the table”

“I think someone slipped something in my drink”

*Checks her purse for phone, phone is lost*

*Checks purse again for phone, lost the purse too*

10:16PM — Over in Boystown, a caller reports that there’s a man selling drugs inside of D.S. Tequila. The alleged dealer is described as a white man wearing green Mardi Gras beads.

10:16PM — Unknown officer: “Can you help us on these descriptions? Everybody out here has a green shirt and blue jeans on today.”

Except that one black guy in the red, don’t forget about him.

10:40PM — Large fight breaks out at Roscoe and Halsted. Police eventually find a victim at the nearby 7-Eleven, bleeding profusely from his eye. The victim refused to sign a complaint.

The guy who called the Cops on the drug dealer could learn a thing or two from this one. Alls fair in love, war, and St Patrick’s day.

11:05PM — Back in Boystown: Four men fighting outside of Hydrate, Halsted and Cornelia. Police find a man beaten in the alley. He’s carted off by ambulance.

“Hey guys, what’s this place? This looks like a cool bar, Hydrate? Kind of a bad ass name, bet we can find some sluts in here”

*Walks in and immediately gets hit on by a guy*

“What the fuck dude, are you gay or something? I’m going to kick your ass” 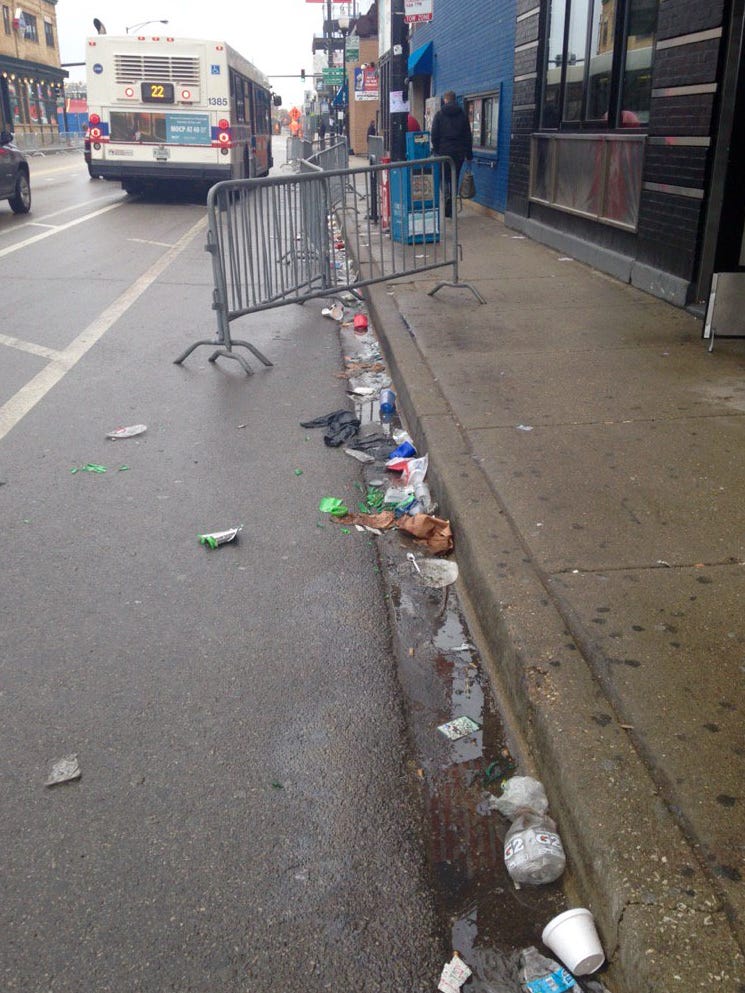 MIDNIGHT — The caller says he can’t leave Peet’s Coffee & Tea because there are a bunch of guys outside waiting to beat him up. 3500 N Halsted.

Favorite one the day. Like a cat being chased up a tree by a pack of Dogs. Dude is just stuck in Peet’s pretending to order a green tea so he doesn’t get his ass kicked. Pray for whatever poor teenager is stuck behind the counter dealing with that one.

“Tommy you cool to drive?”

1:11AM — Clark and Belmont for the woman who’s threatening to stab people at the #22 bus stop. “They think she’s a mental.”

The rare “probably just a crazy person and not a drunk college kid” call of the day. Great day to be a raving lunatic in the City, takes all the way until 1 in the morning for people to notice you.

1:49AM — Officer: “This guy looks like he fell flat on his face, but he’s refusing service, so we’re done here.”

Annnd scene. The perfect way to end the night. Guy eating shit over and over and gutting it out. If that’s not St. Patrick’s day in a nutshell then I don’t know what is.