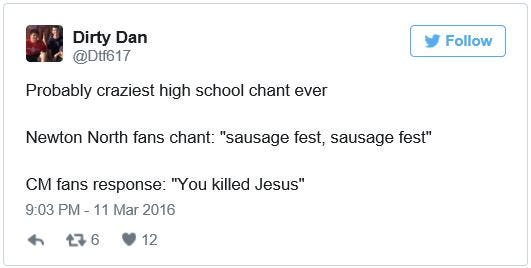 BOSTON — An ugly thing happened at a high school basketball game in a suburb of Boston Friday night. It occurred at a division title game between the all-boys Catholic Memorial School and the public Newton North High School, which has a large Jewish community of students. The game was held at Newton South High School, where an estimated 100 young men sitting in the student section cheering for Catholic Memorial shouted, “You killed Jesus, you killed Jesus,” according to several witnesses who asked not to be identified. Most of those chanting fans wore red shirts as a display of support for their team. Some of the witnesses, who were Jewish, said they found the chant alarming.

Where is Brendon Frazier to beat everybody up when you need him? I mean in this day and age when everybody gets offended by everything it’s pretty obvious an anti Semitic chant is gonna get you in trouble. Having said that I think being called a “Sausge Fest” is still more insulting. One is ancient history and one is real time. Like if you’re still all riled up about Jesus dying you got to grow up. Plus wasn’t Jesus a Jew? So this was just a simple case of Jew on Jew crime. Either way not the best look for Catholic Memorial.