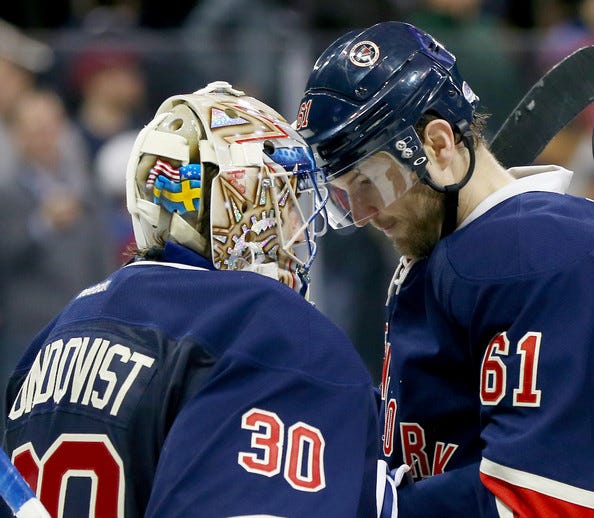 OK, so March’s regular season home stretch got off to a bad start for the NY Rangers. They dropped a game within a 2 minute span to the Pens while losing Lundqvist in the process. Then they followed up a solid W over the league’s top team with a disaster against the Isles & an undeserved two points over the Sabres. Three days off was a welcome break after some ugly hockey for AV’s squad to re-focus & start this “home stretch” thing all over again. Looks like they’ll be getting some help too.
After leaving the game in Pittsburgh over a week ago, Hank’s ready to roll & will be getting the start tomorrow. While Raanta helped the Blueshirts take 4 of 6 points, Lundqvist is obviously the guy they’ll need as their anchor come playoff time. He’s been in peak form since the calendar turned so hopefully he doesn’t skip a beat. This back-to-back is the first of three over the rest of the month, so Raanta’s number will be called upon a couple more times for sure regardless of if he sits or not Sunday vs the Penguins.
Also, Rick Nash (remember him?) skated at practice today cleared for contact. After missing 20 games (which NY won 13 of) with what must’ve been one HELL of a bone bruise, we should get our first look at what the Rangers will look like up front at full strength with the addition of Eric Staal. That’s if Derick Brassard can overcome the “flu symptoms” that had him skip today’s skate. Staal centered Nash & Stalberg today which makes for a pretty monstrous two-way trio with all three being at least 6’3″ & over 200 pounds. Not gonna lie, if Brass has to miss a game for me to get a look at that line in action I’m all for it. Oh, Eric’s little bro looks like he’ll be back as well.
Speaking of Brassard, is there a group of people affected by the flu more than pro athletes? The most healthy sect of humanity in the country? Wish we could just cut the bullshit & call a hangover a hangover. Tell the truth. “Brass was out last night & crushed too much Sangria before an all-night blackout bang sesh like 20-something pro athlete millionaires sometimes do. We sent Kreider in to drag his ass to practice. He said something in French while puking so Chris took a teabag selfie & left him there. Teammates will make him twerk in a tutu as punishment, but he won’t be skating today.”