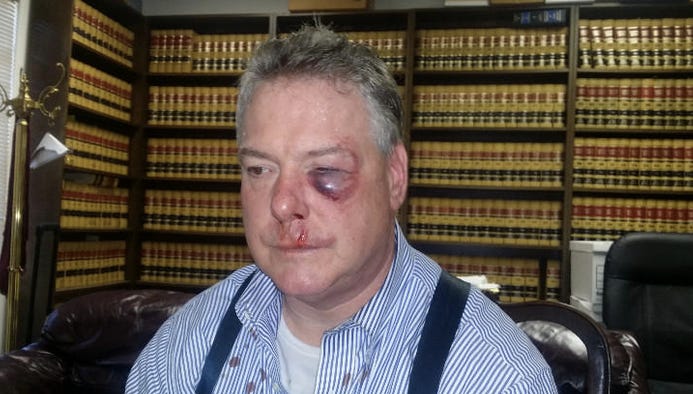 Good god, what a picture. When I saw the headline I assumed this was a lawyer fight. You know, the standard fight between people wearing Sperrys and polos yelling, “My dad’s gonna sue you!” at each other. But, boy oh boy, did this dude get his ass kicked. I had Chris Tucker eyes the second I opened that page and saw this dude’s face, it looks like Vin Diesel took a wrench to his head because he killed his father or something. I guess that will teach him to participate in snitch scandals, though? I have no idea if there was a connection or if this was strictly a paper clip throwing related incident, but the second you sign on for a snitch case you have to know you’ll get your just deserves eventually. Snitches get stitches, Crawford. Doesn’t matter if you work in an office of leatherbound books and wear suspenders, or if you’re a bottom bunk bitch out on D block, snitches get stitches.