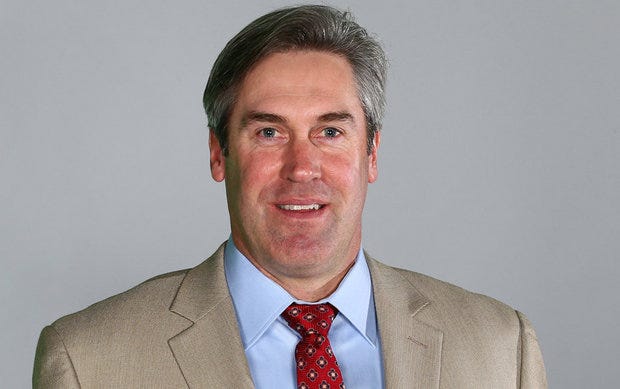 PFT – Eagles coach Doug Pederson wants to put any thought of a quarterback controversy to rest. After the Eagles signed quarterback Chase Daniel on Wednesday, questions were raised about whether Daniel could unseat Sam Bradford as the starter. But Pederson said today that everyone understands the pecking order, and Bradford is ahead of Daniel on the depth chart. “Sam Bradford is the No. 1. Chase Daniel is the No. 2,” Pederson said. “We’re working on the No. 3.” So let there be no doubt: Bradford will open camp as the Eagles’ No. 1 quarterback. Realistically, however, Daniel’s familiarity with Pederson’s offense may give him a chance to out-perform Bradford and unseat him as the starter. And given Bradford’s injury history, there’s a pretty good chance Daniel will start at some time this season.

Good shit, Doug P. Fresh. Way to come in and stamp your bland dick down right away and avoid all speculation that Chase Daniel will be given a chance to start for the Eagles over Bradford. Like I said before, the best player should play and I don’t care if it’s a competition, but it should not be neck and neck going into the season. Sammy Sleeves is the starter. I expect to hear a different story this time next week when Sam Bradford is traded to the Broncos, but for now this is the right call to calm the masses. Howie and Doug sticking to that Frank and Claire Underwood gameplan to a T. #Daniel2016

The Artist Formely Known As Sanchez is (somehow) still a certifiable backup in this league, so I’m sure he’ll bounce back on his with another squad. And I will give all $32.35 in my savings account to have that team be the Jets just to see KFC have a conniption. Time is indeed a flat circle.