Big Cat’s Note – @Spreadepedia is a real sharp guy on twitter who specializes in Big West basketball, no selling of picks or anything like that, just a guy who knows this conference inside and out. He also does good baseball stuff as well 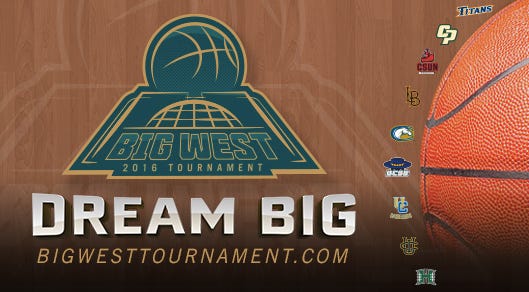 The Big West tournament opens today with four games at the Honda Center in Anaheim. Only four  teams (Hawaii, UC Irvine, Long Beach State, and UC Santa Barbara) have a shot at winning the tournament and securing an At-Large bid to the Big Dance. But Santa Barbara is pretty overrated so it’s more like 3 teams. Anything other than an Irvine/Hawaii championship game on Saturday night would be a surprise. None of today’s games are very interesting and would be unwatchable without betting.

My best bets for the first round of the Big West tournament are below:

Game 1: No. 4 UC Santa Barbara (-8 -110) vs. No. 5 UC Davis – The first game of the tournament tips off at noon pacific. Just because you don’t know a single player on either team shouldn’t prevent you from betting on this. The arena should be empty for this noon tipoff and I was hoping both teams start off flat for a 1H under, but 55.5 is too low of a total here so I will pass on a 1H bet. Santa Barbara comes into this game on a 4 game ATS win streak, while Davis comes in with a 5 game ATS win streak. Davis should be able to slow the pace enough to keep Santa Barbara from pulling away so I am playing the full game spread on Davis +8 for 1x unit and I am teasing Davis up to +13 with Long Beach State -3 for another 1x (laying 6/5 on the teaser).

Game 2: No. 1 Hawai’i (-11.5 -110) vs. No. 8 Cal State Fullerton – The next game of tournament tips a half hour after the conclusion of the UCSB/Davis game and features #1 seed Hawaii, who are also the most athletic team in the conference. Hawaii head coach Eron Ganot guided the ‘Bows to their first Big West regular season championship and a #1 seed in the Big West tournament. Ganot was named Big West Coach of the Year, and will be a candidate for a job with a better program in the near future. This game should be a blowout, but the line is fair and I will wait until halftime for a bet on this game.

Game 3: No. 2 UC Irvine (-6.5 -110) vs. No. 7 Cal Poly – I made this line Irvine -6.5, and I played Cal Poly +8 on the opening line. It moved to +6.5 overnight. +6.5 does not offer compelling value compared to the previously available +8 and I would not recommend taking this line 1.5 points worse. Both teams play at a relatively slow place and Irvine has a nasty habit of getting into 4 or occasionally 6+ minute scoring droughts. This is Irvine’s Achilles heel. Irvine does make up for their shitty offense with suffocating defense. Irvine is 36th overall in the country in scoring defense, limiting opponents to 65.6 points per game. I played the 1H under 63 -110 for 1.5x and that number is still available. After the overnight line move I also played Irvine 1H -3.5 -105 for .5x units.