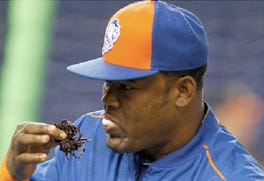 CHICAGO — Chicago could put a stop to the chewing and spitting of tobacco at baseball games. Alderman Ed Burke, the city council’s leading anti-tobacco crusader, has introduced a smokeless tobacco  ban for players at Wrigley Field, U.S. Cellular Field and other sporting events. Chicago would become the 4th big league city with such a ban, joining San Francisco, Boston and Los Angeles. New York and Toronto have legislation pending.

I try not to stick my foot in the puddle that is American politics too much for a few different reasons,  most of them centering around the fact that A. I just don’t give a shit and B. I have no idea what I’m  talking about.  But the second some goddamn politician tries to banish man from using nicotine is the second I say “fuck this” and put my foot down.

Dip is the shit and that is a fact.

I just watched National Treasure on SpikeTV last night, so I’m an expert on the Declaration of  Independence at this point.  Long story short, the Founding Fathers voiced their displeasure with the English by telling those dirty Red Coats to fuck off somewhere and that they were forming their own country.  More specifically the Founding Fathers said, “We hold these truths to be self-evident, that all men are created equal, that they are endowed by their Creator with certain unalienable Rights, that among these are Life, Liberty, the pursuit of Happiness, and the right to dip wherever man goddamn pleases.”

Now that America’s become pussified with PC culture, we have asshole politicians trying to alienate these God given rights.  And I won’t have it.

Real talk though – I grew up playing up playing and watching baseball. I would spend hours in my back yard emulating Ken Griffey Junior’s smooth as silk left handed swing or Sammy Sosa’s patented crow hop when I was a young, impressionable 8 or 10 year old.  Never ONCE did I see a player on TV or at a game with a dip in and even wonder what it was, let alone think “wow I wanna dip just like that guy!!!”  Maybe it’s just me but I highly doubt banning players from dipping at Chicago’s baseball stadiums is going to make one ounce of a difference in whether or not a kid chooses to dip or not.  All it’s gonna do is piss off players who do dip if it even stops them from dipping at the park in the first place.  And the LAST thing we want is The White Sox to be any less of a desirable free agent destination to blue chippers.  Not sure if you heard, but the Sox were in talks with like 4 big ticket OFers this year.  They probably heard about this asinine rule and wanted nothing to do with Chicago, and I can’t even really blame them for that.

As my good friend Joe Dirt once said, “fuck outta here with that Skoal pussy shit.”

PS – Redman is gross, it’s like you have a mouthful of motor oil