Getting angry at Hannah Storm for basically no reason.

Tossing those phones on the table in disgust

Uh oh, schefty is starting to crack folks. He doesn’t have Mort to kick around anymore, now it’s the Rapman firing off scoop after scoop right in his face. Schefter watching his whole empire crumble in less than 24 hours. You can hear it in his voice, you can see it in his face. He was ready to walk off the set on Hannah Storm even though Hannah was just doing her job. One of those situations where Schefty doesn’t even know who he’s mad at or why he’s angry but his voice is now stuck at yell talking. Someone get this guy a snack and a glass of water. Hate to see Schefty like this, choking under the big lights. Let’s all tell him he’s doing a great job on twitter, get him back in his groove. Because this face, this scares me and as you can see, it scares the woman sitting next to him as well. She looks like she’s about to cry at another Schefter outburst.

“I am smiling mom, just take the picture, I want to go outside and ride my bike” 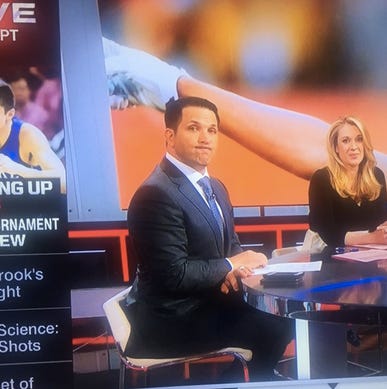