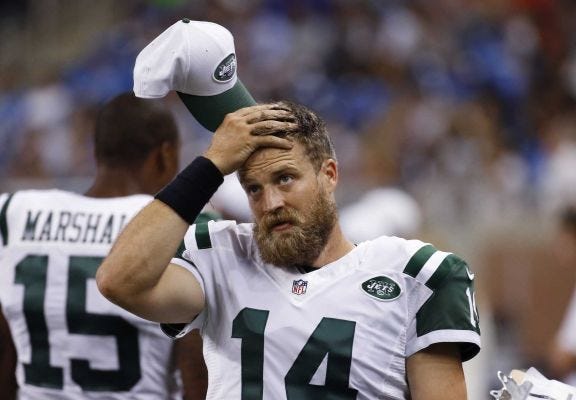 I’ll tell you who I would not want to be right now – Mikey Mac. I am not envious of him at all. A damned if you do, damned if you don’t sort of situation unless you make the playoffs next year. The quarterback market and options for Fitzpatrick have the Jets in an impossible situation.

Right now, at the moment, the amount of money flying around for shitty quarterbacks is absolutely nuts. When you’ve got Matt Flynn saying he thinks shit is inflated, that’s how you know it’s been a nutty offseason for QBs. And despite all the jokes Ryan Fitzpatrick has endured his whole career, the fact of the matter is with the numbers he put it, he deserves just as much as Osweiler or Bradford. Could make the argument even more on a short term, per year basis. And if the previous QB contracts being handed out didn’t make things complicated enough, the Super Bowl Champions being a potential landing spot just jacks up the whole situation. After seeing what Denver did with the Corpse of Peyton Manning and like 1 good game from Brock, you could conceivably say that with Fitz under center that would be an improvement and they’d be a threat to win another. I mean obviously repeating is damn near impossible and no two seasons are alike, but in a vacuum, just discussing Fitz replacing Peyton/Brock, the Broncos wouldn’t miss a beat at all at QB.

So Ryan Fitzpatrick is in the very enviable position of being a free agent in an over inflated market, with a Super Bowl champion as a potential landing spot, with his old team by the balls because they have a ton of offensive weapons and no realistic replacement.

And yet, on the other side of things, I think it’s COMPLETELY reasonable to not break the bank on Ryan Fitzpatrick. He’s the best option by far, but is he worth mortgaging the future? Could you really blame any GM who says “Ryan Fitzpatrick is not worth $18 million.” Of course not. He’s absolutely not worth that. Taking a risk on a guy like Kap and having a few million still in your wallet is a reasonable plan B for a franchise that’s not trying to get swept away in a league wide spending frenzy. That’s how you end up with a shitty cap situation and yet another QB controversy on your hands in a season or 2.

In years past I would have said “Do you think Ryan Fitzpatrick is going to win you a Super Bowl?” and the answer would be an obvious no. But you take a look at how the Broncos just legit won a title without a real QB and you realize that’s not ridiculous. With the right team around him – something the Jets are already well on their way to building – Fitz might actually be good enough. Before you get all worked up and say “KFC thinks the jets and Fitz are gonna win a Super Bowl next year! Hahah!” understand that’s not what I’m saying. Just that it’s not as simple as “Hes not a Super Bowl caliber quarterback, so just pass.”

The Jets have a handful of guys in Win Now Mode and Fitz knows that. Fitzpatrick has only played effective football under Chan Gailey and has a winning offense around him in New York, and the Jets know that. Fitz for sure has the upper hand here but I genuinely think it’s in everyone’s best interest to make it work. Even with Denver being a potential option. Find that happy medium with a reasonable guaranteed money while still making Fitz feel like he cashed in on this absurd market and let’s go play some postseason football.