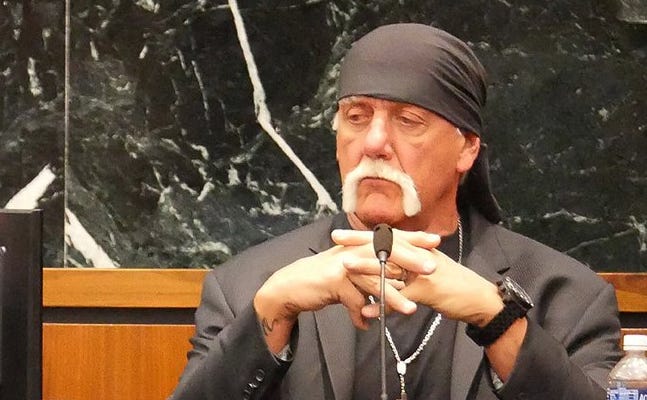 NYT – Jurors in Hulk Hogan’s sex video trial on Wednesday heard a videotaped deposition of Gawker’s former editor in chief — saying he’d draw the line at posting the sex tape of a celebrity who is under 4 years old. A.J. Daulerio, 41, was sitting ramrod straight in the Florida courtroom during the awkward moment when he was asked on video by Hogan’s lawyer, “Can you imagine a situation where a celebrity sex tape would not be newsworthy?”

Daulerio answered flatly, “If they were a child.”

A Gawker spokesman later insisted Daulerio was being flippant.

Daulerio, who looked bored throughout the grilling, wiping his eyes and resting his hand on his chin, also claimed he would have no problem if his own hypothetical sex tape was published. “It wouldn’t upset you in any way to have your sexual encounters appear on the Internet?” he was asked. “I somewhat expect that to happen at some point,” Daulerio said. During Day 3 of the trial, jurors seemed distressed by Daulerio’s cavalier attitude about posting the sex tape.

So today has been a long, boring day. Barely any talk of Hogan’s dick at all. Mostly boring testimony, but there was this guy AJ Daulerio, former editor-in-chief of Gawker, who could not have given less of a fuck about anything. I thought I was going to hate him, but I ended up loving him. First he said straight up that he wanted his readers to see Hogan’s dick. Nothing but respect for that. Kind of the Barstool mantra. If there’s a penis to be seen, by god let it be shown. But holy shit did he hurt Gawker’s case by a million. I’m no lawyer (glad we have that on record) but his “no sex tapes of a 4 year old joke” probably wasn’t the best quip to make in court. And he didn’t stop with the jokes there:

Daulerio went on to say that he found the video “very amusing” and “newsworthy” – and would be “somewhat popular” on the site.

“Did you give any consideration prior to Oct. 4, 2012, as to whether publishing the Hulk Hogan sex tape would distress Hulk Hogan,” the lawyer asked.

“You didn’t care, really, did you?” Harder asked.

“Had you known that Hulk Hogan would be emotionally distressed by this publication you would have still published it, correct?” he was asked.

Anything for pageviews baby! Finally, some honesty out of these guys. Is AJ scummy? Sure. But he’s the first guy to be like “we put it up because it was funny that Hulk Hogan had a sex tape and we knew it would get a ton of pageviews”.

And if you wanted to know why people like us despise Deadspin, here it is in a nutsell: They pretend to be so holier than thou, so far above everyone else. They sit up on their iron throne with SB Nation and the like, judging everyone else. I mean shit, the motherfucking current Editor in Chief at JEZEBEL was second in command at Gawker and okay’d this tape going up. Anything.For.Pageviews.

Harder read the jury a paragraph from a 2011 GQ profile of Daulerio when he was the head of Gawker’s brother sports site Deadspin. It said: “His tactics -— reporting rumors, paying for news and making Deadspin’s money on stories that are really about sex, not sports — are questionable. His success is not. When he became editor of the site in July 2008, it had 700,000 readers per month. Today it has 2.3 million.” The pseudo-journalist also admitted to paying $12,000 for photos of now-retired NFL player Brett Favre’s penis. He said he didn’t consider the 2012 publication of Duchess Kate Middleton’s naked breasts an “invasion of privacy” because “she’s a public figure” and thought the size of Hogan’s penis was “newsworthy.”

The best part of the day was Hogan’s lawyer who body slammed and dominated the smarmy Gawker lawyer. Pure domination. Now close your eyes and imagine what you think Hogan’s lawyer looks like. Now open your eyes:

Of course that’s Hogan’s lawyer. And he is the man.

Nick Denton, the founder of Gawker, is on the stand now and it’s hard to understand because it’s over video. But he’s talking about pageview whoring and fun things like that. Somehow this trial is going to go into next week. Nothing that happened today made me think Gawker will win.

Catch up on the trial by clicking yesterday’s recap here and then the chronological links at the bottom of the blog.