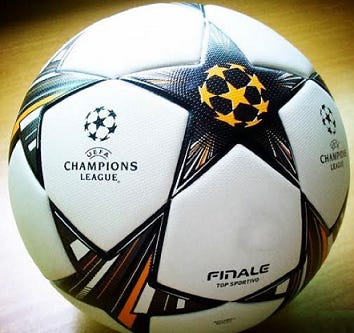 Remember last season when Chelsea was going around phallus-stomping everything in sight but somehow managed to get tripped up by PSG in the Champions League Round of 16? 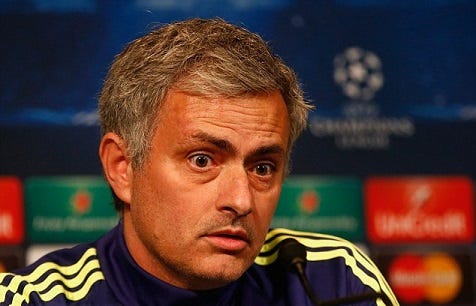 Yeah, well, the dick-kicking shoe is clearly on the other foot this time around, so if ever there was a time for the soccer gods to serve up a healthy helping of “revenge best served cold” than today would be that day.

First though, let’s take a moment to appreciate some baby-making music…

So we are roughly one-quarter of the way through the second leg of the home-and-home Round of 16 games.

Yesterday saw another Serie A club sent packing, which in the grand scheme of things is good news for the EPL as it clings desperately to its fourth automatic UCL slot. The result of that particularly game was a bit harsh on Roma, which could and probably should have scored at least two goals of its own, but hard to say Real Madrid didn’t deserve to go through given the 4-0 cumulative result.

As for Gent, the wee Austrians fought valiantly but in the end couldn’t quite match up everybody’s beloved Wolfy (who, I will hazard to repeat myself one more time, still strike me as likely to be mincemeat in the next round).

Here is the schedule for the next three matchdays, including a handy dandy little rundown of what happened last time out for your reference/reading pleasure: 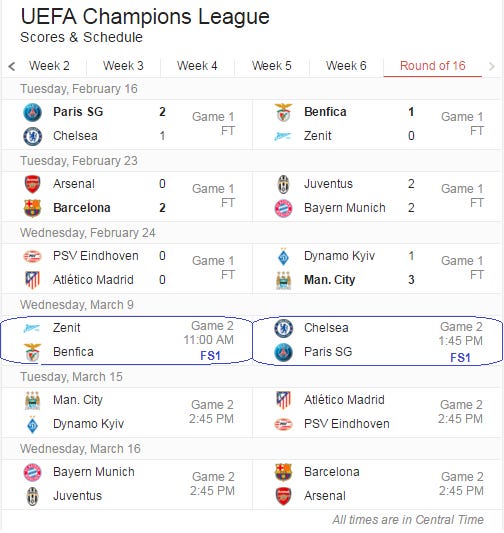 Fucking Russia, man, always ruining my godamn day. Because the country is basically Asia (geographically speaking) they always start the games played in the Motherland extra early, which forces me to try to get up and write this blog instead of sleeping til noon per usual. #BlogLyfe

Anyway, since the game is kicking off soon I’ll start with it, even if the game is just an appetizer for the main course.

In the spirit of full disclosure, I put $50 on Zenit to win the Champions League at 100/1 because IF the club can regain the form they were in last fall, and IF they manage to get a favorable draw (saaaaaay, Wolfy in the quarterfinals), then much crazier things can happen – and in fact are happening right now in the world of soccer. 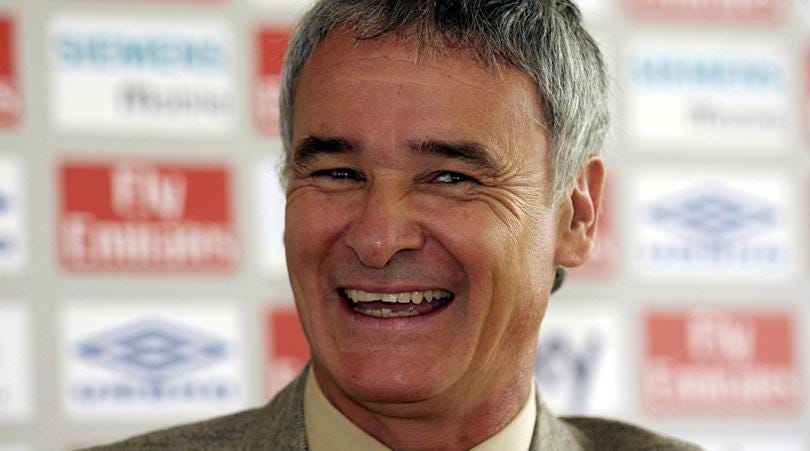 Those are, of course, a lot of Ifs but suffice to say I have a bit of a vested interest in this game. That said, nobody – and I mean nobody – likes going to Mother Russia to play a game in early March, let alone a club from the balmy environs of Portugal. Add to that the fine form of Artem Dzyuba and Hulk, who are going to give Benfica’s admittedly stout defense a serious test… just like they did the first time around when Benfica keeper Julio Cesar came up with some fixture-saving saves. I’m willing to bet ze Russkis bring their finishing shoes this time around. Zenit to win 2-0.

How Russians warm up at HT

Chelsea has not lost in the three months since The Goose took over from Mourinho, save for that one little blemish against PSG in the first leg. The Blues (and specifically their coach) are probably not getting quite enough credit for the remarkable turnaround, however, despite all the not-losses they have racked up, Chelsea has not exactly been winning a ton of games. Take last weekend’s result against Stoke for example, where they gave up a late equalizer and settled for a point. That type of effort is not going to get it done today against a club that, let’s be honest, was built (using billions of petro-dollars) for one purpose: to win the Champions League.

Some people may point to PSG’s recent slip up (a 1-3 loss to Lyon) as reason for more optimism that Chelsea could turn the table, but manager/consummate Frenchman Laurent Blanc has been resting players and conserving energy with this game in mind for weeks – an advantage with being 23 points up in the Ligue 1 table. Both clubs are missing a couple guys (Terry for Chelsea; Veratti for PSG) but the Frogs simply have too much talent to lose this game.

My guess is Chelsea puts on a great performance, perhaps their best of the season, and it comes right down to the wire… but a 1-1 draw just doesn’t quite get it done.

So there it is, the second-best ever Champions League preview that Barstool will publish all day. Some incredibly tasty Europa League matchups coming up so chances are I might pinch off another blog tomorrow… or maybe not. We’ll see. It is Europa, after all.