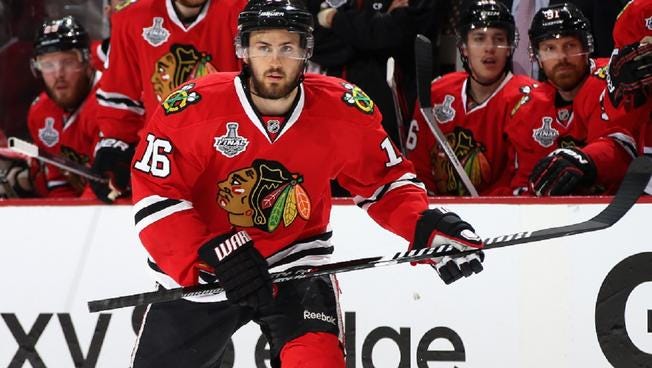 Does 3M+ over three years feel like a lot for a guy with zero goals? Yeah, sure. And yeah with the Cap as tight as it is and the Canadian dollar being worth as much as Schrute Bucks, its a little concerning that Anisimov, Seabrook, and now Kruger are all getting significant raises next summer.

Here’s the deal though. We don’t have to worry about a thing. It’s the best thing about being a Hawks fan.

Kruger did the Hawks a favor last summer. He never really tested the free agent market. Instead he waited until the Blackhawks had their affairs in order, then he signed for below value. Now, its his turn to cash in. I’m happy for him. He’s everything you want in a bottom 6 center. Smart, tough, wins faceoffs, kills PKs. Guy just has winning habits. Every championship team needs a guy like Marcus Kruger. He also has very underrated hair, and that can’t be ignored.

I haven’t looked to see if Marcus Kruger has a no-movement clause in his new contract, but I would be shocked if Kruger finished this contract with the Blackhawks. Fact of the matter is that both Turbo and Panarin will be RFAs after next season. Not to mention Shaw is going to be an RFA this summer.  They’re gonna have to get paid somehow. My guess is that Stan took care of Kruger now, knowing that someone else will likely be paying the majority of this contract beyond 2017.

As I always say, when you’re in the middle of a Dynasty, you have to worry about tomorrow…tomorrow. At the moment, Kruger is an invaluable part of a Championship team and he deserved to be compensated. Dynasty Reign.