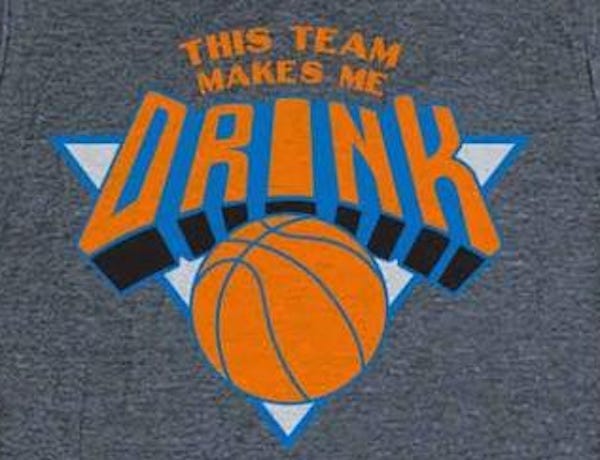 So lets tackle these three stories in order.  First up is Rondo.

NY Daily News- Last summer, as the Knicks failed to secure any of the top-flight free agents, Carmelo Anthony limited his involvement to behind-the-scenes recruiting while management took care of the meetings.  But in a candid session with a couple of reporters Monday — still four months from the beginning of New York’s offseason-of-reckoning — Anthony professed his desire to increase his role in free agency, and started it with a public pitch for point guard Rajon Rondo.  “I think Rondo — just me personally, I don’t want to be tampering — but I’ve heard he said he wouldn’t thrive in a system like this,” Anthony said. “I think he’d be perfect in a system like this.”

Anthony then refuted the idea that the triangle isn’t a system for ball-dominant point guards, or averse to those like Rondo who aren’t good shooters but create through penetration.  “It is a misconception about that. Some of the keys of our offense is penetration, getting in the paint,” Anthony said. “Pushing the pace, transition. Creating in the paint for bigs, for yourself, everybody else. I think a point guard would love that. Especially a point guard who can penetrate, create for yourself, create for others. I think it’s a perfect opportunity for him.  “Put me at the head of the (meeting) table,” Anthony said. “And let’s go to work.”

A few red flags on this one.  First and foremost would be Rajon Rondo becoming an employee of James Dolan.  This would be the most destructive professional relationship since Walt White and Jesse Pinkman were cooking that blue crystal.  It’s already enough of a circus around here. Add Rondo to the mix and The Garden would immediately jump ahead of the Ringling Brothers and those Barnum & Bailey bitches.

By all accounts, Rondo has a, um, different personality that causes him to butt heads with players, coaches, etc.  You add him into the disorganization of MSG and its basically like putting the bullet in Archduke Ferdinand’s brain.  Powder kegs exploding.  Human sacrifice. Dogs and cats living together. Mass hysteria!  The Zen Master would be firing off nonsensical tweets daily like LeBron while Rondo unloaded shots through the media.  Pure. Chaos.

When you add in Rondo’s bad outside shooting in a league ruled by teams with good shooters and potential poor fit in the triangle, it makes his signing less likely.  Granted, Rondo has had a good season statistically in Sacramento, but I just don’t see him being a fit here.  Which hopefully will piss off #Me7o and contribute to his willingness to waive his no-trade clause.

NY Daily News- Forget that the Knicks have an unresolved situation at coach, they’ll also need to get creative with the roster just to free up enough cap space for a max free agent. A source told The News that the biggest fish in the summer pond, Kevin Durant, does not consider the Knicks as a destination.

If we are being honest, Durant to the Knicks was always a J.R. Smith sized pipe dream.  He didn’t really fit and the biggest drivers were the appeal of New York, his friendship with #Me7o, and his past relationship with Derek Fisher.  Obviously the Fisher stuff is now out the window and the Knicks being pitiful has not helped their cause.  Just another free agent dream that was nothing but hot air coming from the media. So is life as a Knicks fan. It doesn’t hurt as much because Durant coming to a team with #Me7o and Porzingis always felt like a weird fit. This team needs point guard help more than anything, which is why we will all be praying Mike Conley wants to come here for some crazy reason.

And the biggest story of the day, at least in my world.

I saw my little Latvian angel tweet something that clearly upset him.  So I brushed up on my Latvian (AKA clicked View Translation and then went to Google Translate) and let him know I had his back. 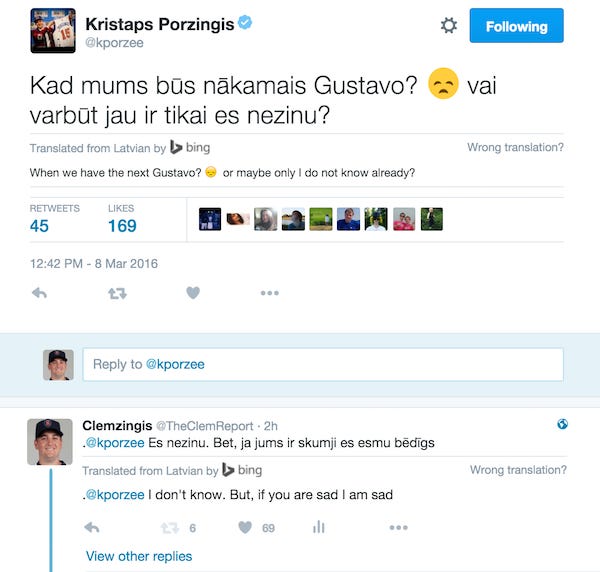 BOOM!!!  The first step to dating the pretty girl is for her to know that you are alive.  The same rules apply for 7’3″ Latvian basketball gods that you want to follow you on Twitter.  Now I have to play it smart from here.  This is the equivalent of said pretty girl laughing at one of my jokes.  Can’t go in for the kiss just yet.  But Kristaps basically told me there’s a chance.  It may be one in a million, but the chance is definitely there. Liepaja wasn’t built in a day, but this is the first baby step to a lifelong friendship. I know it. Going all the way the way to Latvia didn’t spark the flame, but speaking his language did. The Latvians may be a fickle people. But the bottom line is Godzingis clicked the heart on my tweet. And everything is great.