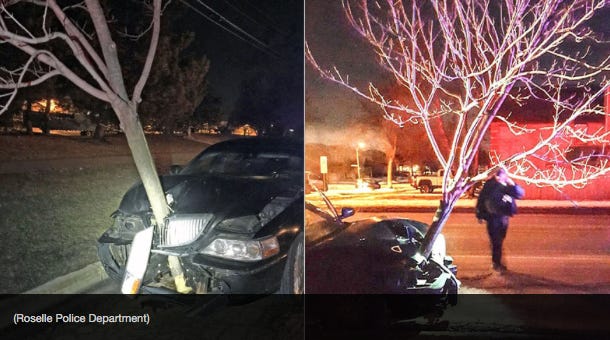 (Source) Perhaps the world does need autonomous cars. Police in the city of Roselle, Ill., recently pulled over a suspected drunk driver, having been tipped off by a fellow motorist who happened to notice a car cruising along with a 15-foot tree stuck in its grille.

After locating and pulling over the Lincoln Town Car, the officer who approached it noticed that the front airbags had been deployed, presumably from contact with the tree. According to the Chicago Tribune, the driver, who smelled of alcohol, admitted that she hit the tree in the neighboring town of Schaumberg, but couldn’t remember exactly where.

The driver then failed a field sobriety test and was booked with a DUI offense. No surprise, the photos posted to the police department’s Facebook page have gone viral, with over 19,000 shares since March 4th, helping it get out the very obvious message:

“Yet another reason why you should not drink and drive!”

Can’t say you see something like this every day. My question is how far does this woman go if no one stops her? Does she get all the way home and then wake up the next day with an entire tree in the hood of her car? How about that for a hangover. Makes forgetting to close out your tab at the bar look like kindergarten shit.  I mean I’ve been black out drunk before, we all have, but to be so blacked out you A) Drove and B) became a modern day Paul Bunyan, chopping down lumber with your Lincoln Town Car, not even mad, just impressed. Thank God she didn’t hurt anyone and I can say that, because a person driving around Schaumburg with a tree literally in the hood of their car is nothing if not impressive.

Can Lincoln use this in an ad? I know you don’t want to promote drunk driving in any way whatsoever but that car is a fucking tank.