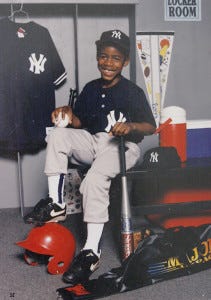 SNY - The Yankees reportedly rejected a trade that could have brought outfielders Jason Heyward andMelvin Upton to New York, according to Jon Heyman.

New York expressed interest in Heyward and shortstop Andrelton Simmons when they were with the Atlanta Braves in 2014, Heyman reports, and turned down a blockbuster that would have sent several top prospects to Atlanta.

The Braves floated a deal to the Yankees that would have sent Heyward, Simmons, Upton, RHP David Carpenter and 3B Chris Johnson to New York in exchange for RHP Luis Severino, OF Aaron Judge, catcher Gary Sanchez, RHP Ian Clarkin and RHP Manny Banuelos.

Thank god this trade never happened. As much as it may have given the Yankees a shot at making the playoffs and maybe even a World Series, it would have mortgaged our future. Beyond the obvious issues of a crowded outfield and a logjam at DH, The Yankees would have traded away the guys that are the future of this team for a chance to add another long-term deal when we’re about to get free of a bunch of those same deals.

Heyward is a great player and obviously The Cubs felt that way by giving him an 8 year $184mil deal this offseason but there was and is no place for him on The Yankees with that kind of deal. Gardner could have been traded to make room but even with moving him, Heyward would have helped block Aaron Judge from getting the chance he’ll get this year and likely would carry a contract that would prevent the Yankees from making a serious run at Bryce Harper. And that’s only if he resigned.

Simmons would have been an upgrade over Didi but for more money over about the same amount of time and for a bigger trade value. Plus with Mateo moving along in the minors, we were looking for a transitional SS to bridge the gap between Jeter and another franchise player. Simmons would have come with a tremendous amount of expectation that Didi never brought and most likely wouldn’t have lived up to those.

Lastly, Luis Severino is going to play a key role in this rotation for years to come but this year may be the most important. If the Yankees traded Severino, I couldn’t imagine what out rotation would look like. Yeah, he’s an unproven kid but with what we saw last year he has a legitimate chance at being our #2 starter and ever a chance to be the ace of this team. We’ll look for him to keep us in games while staying healthy and in the long run, it’ll be better than anything this trade would have brought us.

There’s a lot of people who think this team will get injured and be pretty bad but if any team has injuries, it’s tough to win. By keeping the young guys that weren’t traded in this deal, The Yankees have not only given themselves a chance to win and be younger in the future but also held on to backup for this year.