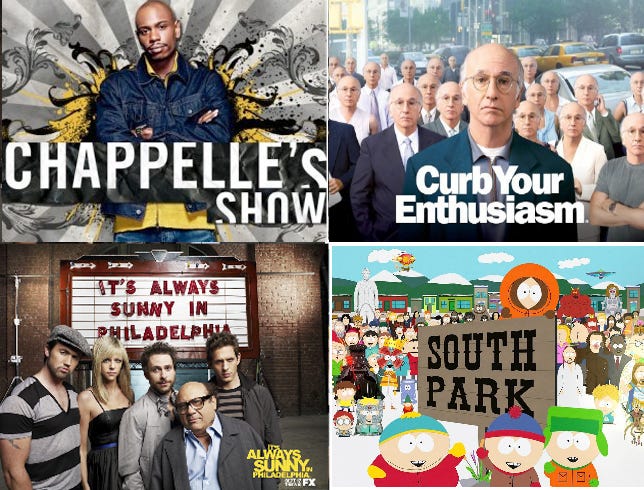 Out of all the Eliminators I have done, this one is the toughest I have encountered. Just four Hall of Fame shows that have all spent time atop the comedy shows throne. Having to pick one to eliminate is just cruel. All four were great right off the bat and kept bringing the heat over the years. Obviously Chappelle’s Show had an extremely short run and season 3 kind of doesn’t count since it was pieced together like a posthumous 2Pac album. I see South Park as the Barry Bonds of TV shows. It was an all-time great, then changed what it was later in its career, became a monster and could be the GOAT. Chappelle’s Show is like if Mike Trout retired tomorrow. The amount of quotes and characters from its two full seasons are ridiculous. And then we have Always Sunny, which is still killing it and Curb, which was able to carry Sunday nights for HBO. The other weird thing about these four shows is that I still have no idea when they would start or finish. South Park and Always Sunny seem to come and go as they please, Curb starts whenever Larry David wants to make another season (hopefully he has another one in him), and Chappelle’s Show just vanished into thin air after Dave lost his marbles like Tootles from Hook.

As for my pick, I think I’d have to eliminate Curb simply because I would still have Seinfeld to get my fix of Larry David’s beautiful mind.  Trust me, it is not something I am happy to do, but the game is the game yo.

However, as always, this is a democratic process.  So vote on which one you would eliminate below.