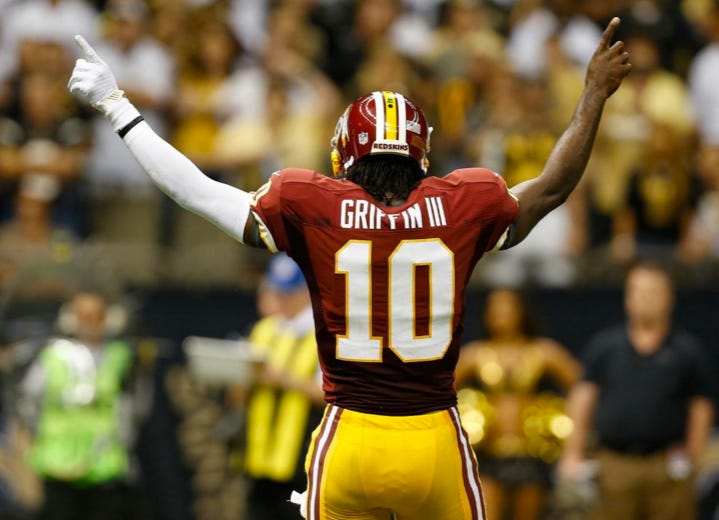 “Don’t cry because it’s over, smile because it happened” – RG3’s away message right now.

The day has finally come. RG3’s career in DC is over. What a wild ride it has been. From trading all the picks for him, to him lighting the NFL on fire in 2012, to blowing out his knee in the playoff game, to “all in for week 1″, to absolutely sucking in week 1, to getting hurt 100 more times, to responding to critics on his Facebook page, to all his catch phrases, his Subways commercials, his statue at Baylor, his dad in the locker room, his playing catch by himself after practice, his bromace with Dan Snyder, his being given a 16 million dollar extension then being deactivated for every game last year, and now finally being cut (with a ton of other ridiculous shit in between), a wild ride indeed. I’m not sure we’ll EVER see anything quite like it again. The social media bullshit, the “no pressure, no diamonds”, and his inability to handle himself like an NFL QB. It’s been the most interesting and frustrating saga I’ve blogged over the last couple of seasons. So many ups and downs. So many weird mannerisms, story lines, and situations. And now he’s officially gone, and Kirk Cousins is our new chosen one.

I’ve said it many times before- I don’t wish him ill will. There are a TON of reasons he didn’t work in DC. A metric shit ton. Coaching, management, injuries, his family, his weirdo brain, all mushed together in a blender and his inability to be an NFL QB came out. I hope he finds his footing elsewhere (outside of the NFC East) and becomes a decent NFL QB again. It’s hard to find QBs in this league, and Robert is young and we know he possesses talent. If he gets the right coaching and leadership around him, he can be successful in this league. It just was never going to be here. I hope he’s learned his lesson and doesn’t make these same mistakes again though. Goodbye old friend.