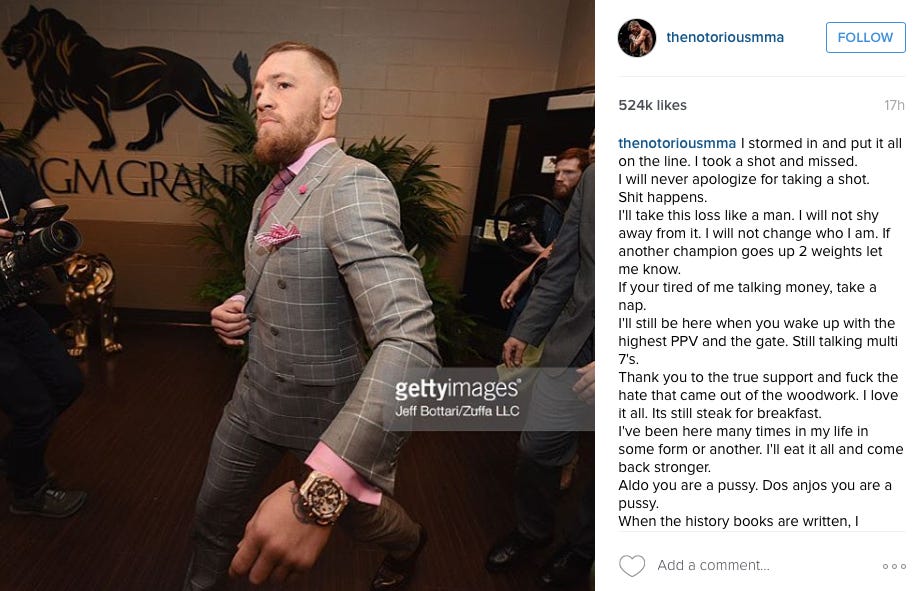 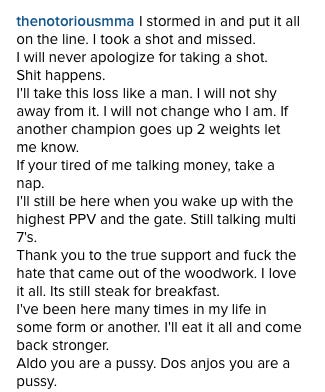 I have to admit, I’m shocked with how well Conor McGregor has handled his loss on Saturday night. Obviously it helps that he has the built in excuse of fighting a guy significantly bigger than he is (it is a valid excuse). But still, after all the talking and grandstanding, I never thought he would be able to handle his loss the way he has. It’s the perfect balance of humility mixed with a confidence that he’ll bounce back quickly. Ronda Rousey basically went into 2 months of hiding when she lost, other fighters have struggled immensely when they’ve been knocked out, but Conor seems to still have his swagger, which was the biggest question once he became a national sensation. Can he lose and still have that draw, and for me, posting an Instagram picture of a Getty image of yourself while calling all your enemies pussies is exactly what I needed. He fights Dos Anjos or Aldo again, knocks them out, and he’s right back to where he was. That’s the mark of a true showman right there. “Aldo you are a pussy. Dos Anjos you are a pussy”. Believe that.

I saw Deadspin reveling in Conor’s defeat because he’s too flashy and talks a bunch of shit. Do people who say that understand how the fight game works? Selling fights to the casual audience is a hard thing to do. Getting people to pay 60 bucks for a PPV takes work. So yeah Conor McGregor talks shit and puffs his chest out but that’s exactly what he needs to do. You can’t sell a fight if you have 2 guys like Nate Diaz at the press conference. You need flash and a story, blame Conor McGregor for not taking Nate seriously but don’t blame him for selling a fight in an interesting and compelling way.