Maryland, in a word, stink. The players individually do not stink. Together as a team, under Mark Turgeon, they stink. Things they haven’t been doing well: hitting shots, defending, rebounding, and they don’t hustle. They miss open looks, they miss contested looks, and last night down 10 with 3 minutes left, they didn’t even take a look, as they let the shot clock expire on an important possession.

This season could not be more frustrating for Maryland. There are 5 potential draftpicks on this squad. This was their best chance in years, and for years to come, to win a championship. And it’s especially frustrating because it’s such a down year in college hoops and Maryland is flush with talent. But with their first B1G tournament game coming up on Friday, they look lost. The offense has no rhythm, they get out-muscled on the boards, and they get outworked on defense. How many more times are they going to make a layup and have nobody race back to play defense in transition? Turgeon should have kept them in the gym last night doing the Herb Brooks “again” drill from Miracle until their legs fell off.  I’ve never seen a team give less effort and do fewer of the little things that you need to do to win a game. A team with this much talent should not look this bad.

Now they still did go 24-7 on the regular season, including wins vs Iowa and Purdue. But there were some bad losses in there too, including getting beat by Minnesota, getting trounced by Wisconsin, and last night’s 18 point beat down by Indiana. The good news is the tournaments are all on neutral courts, which helps the Terps, as they have not been a great road team at all, to say the very least. 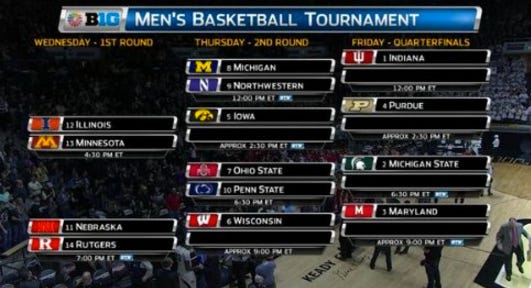 If Maryland beat the Badgers on Friday, they go up against Sparty for the second time this season, as they lost by 9 in East Lansing in January. Two wins in the B1G Tournament would really, reallyyyyy help their tournament resume. A loss to Wisonsin might put them at a 6 seed (a 7 wouldn’t shock me either). A win would put them at a 5 or 6, and a win over Michigan State could possibly put them at a 4 seed, and depending on other outcomes I could see them sneaking into a 3 seed.

Anything can happen in March, we all know this. Maryland has the skill. Melo, Layman, Sheed, Stone…the sky was the limit for this bunch. Maybe now is when they put it together? Who knows.

I for one am just glad March Madness is finally here. This is where the 2 TV setup pays for itself 9 times over. I’m just hoping Maryland stays on TV1 for longer than a cup of coffee.