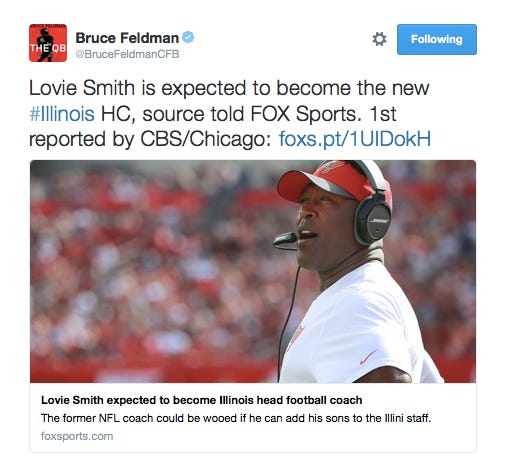 To all the Illini stoolies, congrats? I think? I mean you can look at this from one of two ways. The first is Lovie Smith just went from Chicago to Tampa Bay to Champaign in the matter of a few years. That’s pretty damn depressing in terms of football coaching. The second way you can look at it is the fact that the Illini athletic department in general, and the football program in particular, has been an absolute dumpster fire as of late. Since 2011 they have had FOUR different football head coaches, 3 AD’s, and 2 basketball coaches (baseball has been the one bright spot, and golf, forgot golf). So if anything Lovie Smith is dependable. I have no idea if he can recruit in College, especially after being in the NFL since 1996, but we do know Lovie can coach and he won’t rock the boat. So in that respect it’s a great hire. Still think a guy like PJ Fleck would have been the better move to bring energy back to the program but Lovie won’t be a total mess and in a way that’s a huge win for Illinois.

Lovie Smith back in the state of Illinois coaching football. Strange strange day. “Wes is our Quarterback” – Lovie, soon.