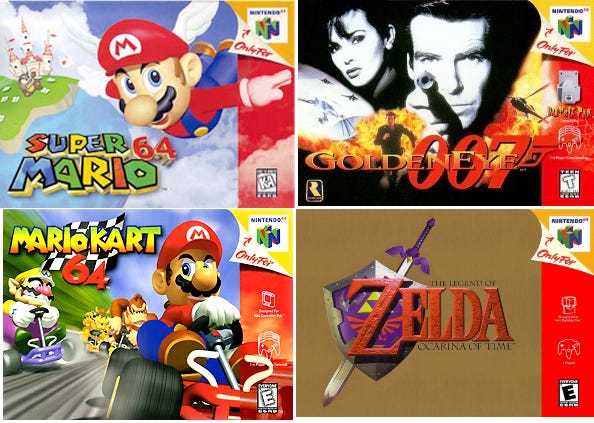 As always, the rules are if you had to pick one of the four to eliminate, which would you choose? I think Nintendo 64 is a good midpoint system for OG video game players like myself and some of the younger Stoolies that may not have dabbled in the original Nintendo or Genesis. And I still cannot believe that Charlie Wisco thought that Nintendo 64 was the first Nintendo of all-time. But it’s not his fault. It’s his family’s fault.

Anyway, when it comes to 64, these four are usually the games atop people’s lists of favorites. The other game I considered adding was Super Smash Brothers, but I went with these four. For me personally, I cannot get rid of Kart or Goldeneye.  Just way too many great memories of playing with my friends.  I think Mario Kart is the most fun video game franchise ever and Kart 64 was a MASSIVE upgrade over the original Mario Kart.  It basically took it from black and white to color.  And Goldeneye was comically ahead of its time and so so soooooo much better than the movie (except for Famke Jansen.  Good lord). Granted, I may be biased towards Goldeneye since I was the Picasso of Proximity Mines and the Rembrandt of Remote Mines.  But that’s beside the point.

So for me, I can get rid of Mario 64 and not even think twice about it. In fact, I can live with just Mario 3 or Super Mario World for the rest of my life and be just fine. Goldeneye and Mario Kart have resulted in countless friendships being made (and probably a few destroyed over somebody using Oddjob in Goldeneye or a well placed lightning strike in Kart). And if I wiped Ocarina Of Time from our world, it would would likely result in mass suicides. I don’t want that on my conscience.

But now it’s your turn to vote. Which game would you eliminate?