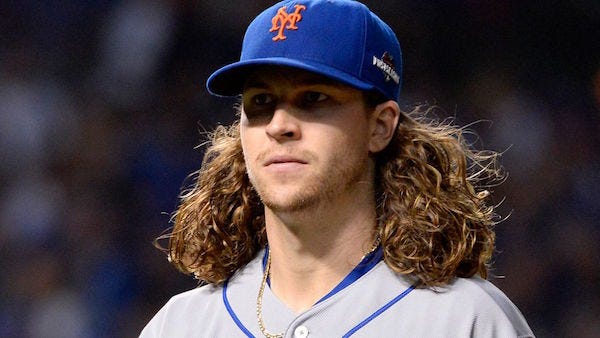 The Record-  So, about that hair. This comes from someone who faced deGrom in the postseason last year, and admitted those flowing locks were a problem. Big problem.  “First of all, I see this guy on the mound who looks like a stick figure,” the hitter said. “I mean, you don’t see major league pitchers who look like that. And he’s got that hair – you can’t not look at it, it’s everywhere. It bothers me when I’m trying to pick up the ball out of his hand. All I see is hair.”

I mentioned that scouting report to deGrom, who laughed and said, “That’s pretty cool.”  I then asked if he’d ever heard about his hair interfering with hitters’ concentration and he shook his head.  “Not really, I don’t talk to hitters much,” deGrom said. “But I guess now I’ll never cut it.”

Oh boy, heeeeere we go.  The Mets rotation is fully formed like Voltron and we have our first excuse of the season coming during Spring Training.  Hey Anonymous Crying Baseball Player Not Named Wilmer Flores, you know why you can’t see the ball?  Two reasons:

Hypnotizing.  The Yankees used to win because people couldn’t stop staring at those damn pinstripes.  Same goes for hitters striking out as they watch that magnificent lettuce dance in the air.  The only person that loves Mr. Met rocking the Jacob deGrom hairdo more than me is Mrs. Met, who probably becomes a slippery spitball the second she see those locks are flowing. 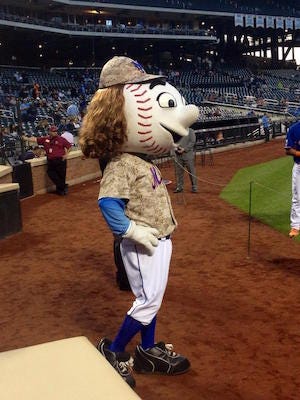 Now I can’t wait to hear the other excuses players come up with for the rest of the Mets staff, too.  Matt Harvey is too intimidating on the mound.  Noah Syndergaard throws too fast.  Steven Matz is too polished for a young lefty.  Bartolo Colon is too sexy.  And whenever Zach Wheeler comes back, we will hear about how he is too good after Tommy John or how its unfair he didn’t get traded for Carlos Gomez.  Wah, wah, wahhhhhhhh.

Just kidding.  deGrom is still under contract and will get paid regardless.  I think everything will work out in the end.  Unless the Wilpons are the types of owners that would let this thing drag on for years.