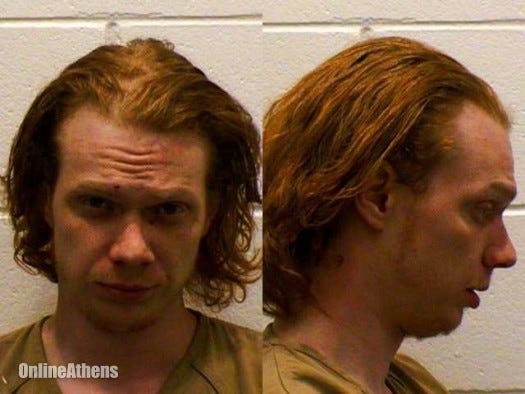 A man dressed in a clown suit was arrested at the downtown Waffle House early Tuesday morning after an employee called to complain he smoked methamphetamine at the restaurant’s counter, according to an Athens-Clarke County police report.

When responding to the complaint at about 4:40 a.m., a dispatcher provided a description of the suspect: a white male about 30 years old who had red hair and was wearing a clown suit, according to the report.

When officers arrived, they learned the suspect was in a locked restroom, and after the Waffle House employee unlocked the door officers encountered 25-year-old Jacob Worthington inside, according to the police report. When asked if he had any weapons, Worthington reportedly responded that he had a knife, which officers removed from one of his pockets. (VIA OnlineAthens)

Ok I got a few problems with the way this is being handled from the media jackals covering it to the police officers involved who were obvously just greedy to make a name for themselves off this big-time bust.

Problem 1. The news paints this story in the absolute worse way possible for the armed clown on meth. First of all the fact that this man is a clown is immaterial to the story. Everyone hates clowns and even people who secretley like them are afraid to admit it anymore because there are so many PC types out there who will object to White Face. Going to be impossible for him to get a fair trial. Also it should be noted that your ALLOWED to smoke at the counter in many Waffle Houses. Its like the neutral zone in “Man in the High Castle.” My understanding is Second hand meth is no worse for you then tobacco.

Problem 2. The headline goes out of its way to say the Clown had meth, but later on you find out that he also had LSD,weed, a mason jar full of shrooms, and a unidentified white powder which is obvously going to turn out to be bath salts. If “journlists” did their job anymore they’d understand that possesing mushrooms in a Waffle House is 100% legal- called ordering your hash browns “capped” and if these elite media types had ever taken a cab while absolutely hammered after a night skulling beers with there Uncle outside Savannah for a late night 4th-meal brinner they would know that. Using “meth” in the headline makes for a sexy clickbait, but if it read “Fun Clown on shrooms dined merrily in Waffle House feast” this guy becomes a instant hero and has a GoFundMe set up for his legal expenses within the hour.

Also to me this seems like a problem of numbers. Seeing a lone clown is unsettling, but if theres two of them its a unexpected circus and theres no chance the authorties ever get involved here.If he had a buddy clown with him, everyone goes home to there families. He was targeted because he happens to look and dress a little different from everyone else.Absoluteley screams profiling.

Problem 3. Story goes on to mention the clown was a former “member of the U.S. Army’s 310 Psychological Operations Company” which has Obama written all over it. Tells me this whole incident might be a setup as a pretext for the US Miltary to implement Martial Law. Take one look at Americans list of fears & number 1 is going to be “clowns” every time, about 9 spots higher than “terrorism.” If you thought the goverment scared us into taking away our freedoms because of 19 guys with box cutters on planes, wait till the headlines are filled with stories about random clown attacks at popular chain restaraunts. So long Bill of Rights.

The officers had to break into the Waffle House bathroom to arrest the clown. Your 4th amendment protects you from unreasonable search and last I checked theres nothing illegal about a clown taking a shit. And if I know anything about Waffle Houses- a clown recreationally blasting up on ice was probably only the 3rd or 4th most illeagal thing going on in that particular bathroom at 4:40 AM.