CNN – Mitt Romney delivered a sweeping broadside against Donald Trump on Thursday, laying into the Republican presidential front-runner with a sharper attack than any of the party’s 2016 contenders have made against the billionaire business mogul. “Here’s what I know: Donald Trump is a phony, a fraud,” Romney said. “His promises are as worthless as a degree from Trump University. He’s playing members of the American public for suckers: He gets a free ride to the White House, and all we get is a lousy hat.”

“Donald Trump’s promises are as worthless as a degree from Trump University.” BOOM! Roasted?

Mitt, Mitt, Mitt. Or should I direct this to the Republican Party in general who convinced Mr. Romney to put down his chocolate milk and attempt to come out talking. You think these PC comments combined with actual “Facts” and “Numbers” are going to stop Donald Trump’s Blitzkrieg of a campaign towards the White House? If anything the passiveness and logical thinking simply fueled the fire. This is a certified nucleus war at this point. The only way you can retaliate against Trump’s atomic bombs is build a hydrogen bad boy. You can’t bring out a nice, aw shucks Mormon to do a mass murdering tyrant’s job. You need to find someone just as batshit willing to saddle up on that bomb and ride it towards that hairpiece like how it was dropped in Dr. Strangelove. Who is that? The fuck if I know. But if the Republican Party wants to get rid of The Donald they’ve gotta find someone to fall on the sword then take their exposed intestines and choke Trump to death. Or just have Chris Christie declare a mutiny and have him release Stewie Griffin from his pants to end Donald’s days. That little guy has been suffocating inside there long enough. 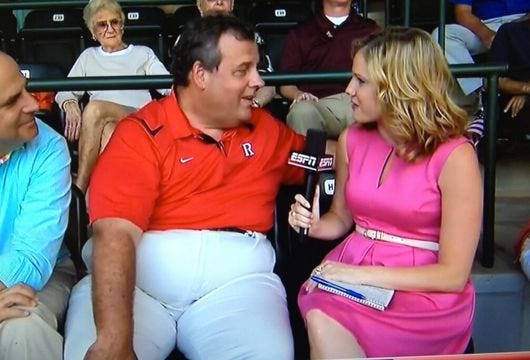 PS – Mitt’s reaction to not hearing a laugh or applause after the Gambling/Hat joke is priceless. Love seeing a bombing in the flesh. Never gets old.