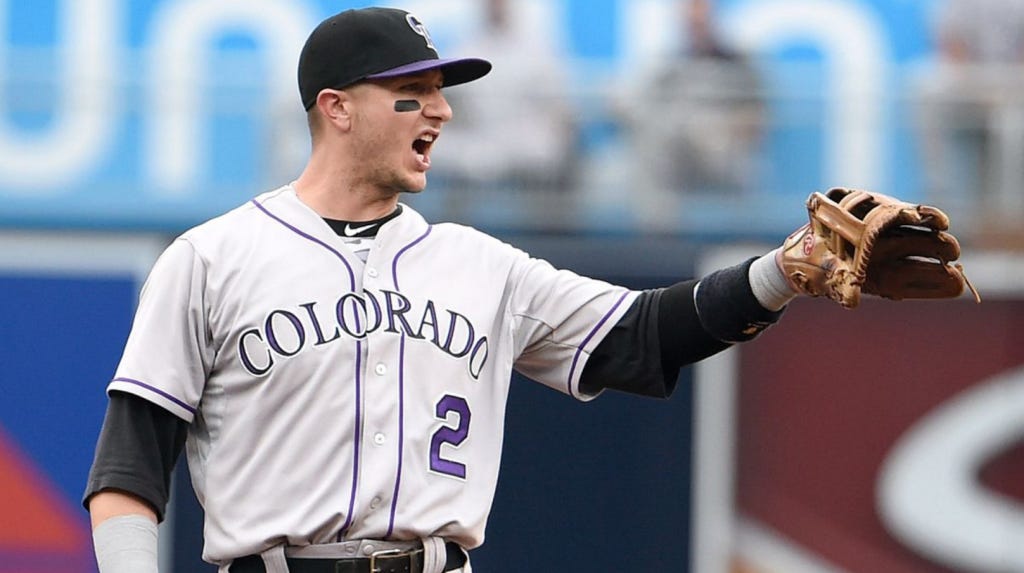 Troy Tulowitzki was the face of the franchise for the Colorado Rockies. As the story goes, the Rockies had made a promise to Tulo that if his name ever came up in trade talks that they’d give him a heads up. As it turns out, they didn’t say a word to the 31-year-old shortstop, and flipped him to the Toronto Blue Jays for a package of four players. Needless to say, Tulowitzki was upset about the broken promise. But then he spoke with Ken Rosenthal this spring, and said that, although he was still upset about it well into his Blue Jays tenure, he’s now over it.

He talked openly about that bitterness, talked about how the Rockies promised to keep him in the loop and “man, that was the furthest from the truth.” At the time, I wondered whether Tulowitizki would ever move forward. But as I walked into the Jays’ spring-training clubhouse on Friday, I quickly discovered that he had.

“I was honest last year saying it was very tough for me,” Tulowitzki said. “And now I’m honest saying I’m over it.”

That’s great! Glad to hear, man. You shouldn’t hang onto stuff like that. It’s toxic. You know what they say, holding a grudge is like poisoning yourself and expecting the other person to die. Shit just ain’t worth it. I just found it a little odd that Tulowitzki told Rosenthal that he was over it, and then the next day talked to Bob Nightengale of USA Today, and the interview sounded like it was from last August.

“I’ll never talk to him, never talk to those people,” Tulowitzki told USA TODAY Sports. “You get lied to, straight to your face, you get upset. I believe in forgiveness, but at the same time, I don’t plan on being friendly with them, or anything like that.’’ The last time he talked to Rockies GM Jeff Bridich was the evening of July 27. Tulowitzki was sitting with Walt Weiss in the visiting manager’s office at Wrigley Field, and he was screaming at him, after being notified he had just been traded to Toronto.

One day, you’re over it. The next day, fuck them I’ll never talk to them again. Classic breakup reaction. Saturday night, you’re feeling nice, you look good, you feel good, and you’re like yeah, I’m over her. Who gives a shit about her, anyway? You’re out with your boys, you’re having a good time, having a few beers, talking to a few girls, not thinking about your ex. Then the next day, you’re hungover, Monday morning is quickly approaching, you hate your life and you hate your ex again. I don’t even blame Tulo for flip-flopping here. He’s just going through the motions of a bad breakup after a 10-year relationship. We’ve all been there.

You wanted to put a ring on it, you wanted it to be forever, she told you she’d never leave you, you’ve had a nice place together for ten years, maybe a little dog that you guys treat like your child, and then she goes and fucks your best friend, you have to move out of your apartment, and she gets to keep the dog. Brutal. It happens, man. It’s okay to be upset about it, but just know that your new girlfriend, the Toronto Blue Jays, is way hotter than your ex, the Rockies. Like, way hotter.