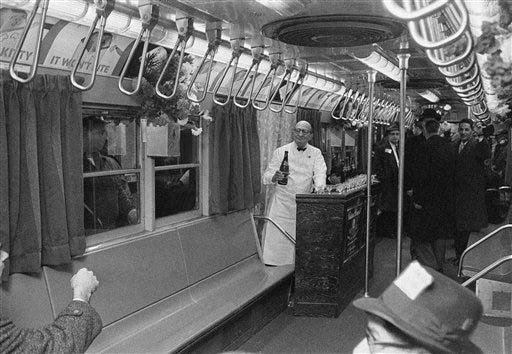 Vibe-  New Yorkers may have gotten some good news this week, or at least New Yorkers over the age of 21. City officials announced that beginning March 7, Manhattan law enforcers will cease to make arrests for “low-level offenses,” according to Thrillist.  Under these new rule changes, New Yorkers will not be arrested under charges for public consumption of alcohol, public urination, and poor subway behavior like walking in between cars or taking up more than one seat. Yes, public drinking and urination are still illegal and poor subway etiquette is still in bad taste, but now officials will not make arrests on any of these offenses unless it is “necessary for public safety reasons.”  So sipping a bit of a beer on your walk home or walking with an open container will not be persecuted in court. Instead, if deemed inappropriate, the offenses will be slapped with a fine or court summons.

By falling back on low-level offenses, police will have more time to focus more on violent offenders. “Using summonses instead of arrests for low-level offenses is an intuitive and modern solution that will help make sure resources are focused on our main priority: addressing threats to public safety,” Mayor Bill de Blasio stated.  He further stated that the reform “will also help safely prevent unnecessary jail time for low-level offenses.”  Sorry party goers: the rule change only applies to those in the Manhattan area. But to those that this applies to, feel free to sneak a couple of sips on your way back from the bodega after March 7.

Mayor de Blasio, you dog you.  The easiest way to get a giant boost in your political ratings has to be to decriminalize public drinking and pissing just as the weather is about to turn around. Spring is already a magical time in the city as the sun dresses appear and beer gardens open up. Now being able to drink and/or piss in between stops is truly a blessing. Granted, it’s not like Mahattan is about to become Hamsterdam or anything. Drunk idiots shouldn’t start flooding the streets in pee and I’m sure cops will bust balls if it is necessary. But this is progress. The first step to the perfect city. Just find a way to ship the rats, roaches, homeless, and really shitty people out of here and the quality of living index of New York will shoot through the roof.  Now lets start dreaming about The Perfect Storm of 2016 (St. Paddys Day and the first day of the NCAA Tourney) being 75 and sunny.

All that being said, if you take up more than one seat on the subway, you should take a billy club to the face.  Even an enormous guy like myself can scoot over and give the people next to me enough room to sit down.  Maybe not the ideal seat, but my heart is in the right place.  If you can’t do that, you are a heartless barbarian.  And yes, there is a chance that New York resembles The Purge at 12:01 AM on March 7th.  But those are the risks I am willing to take from the suburbs.