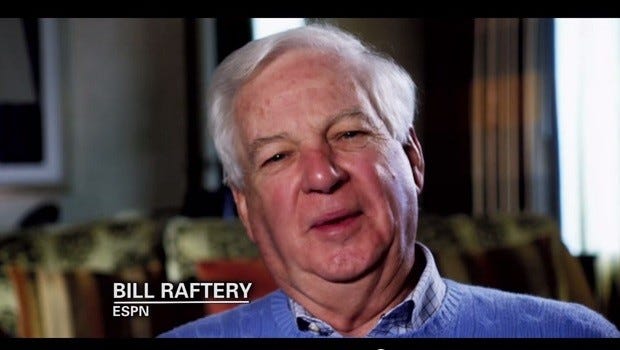 Well, the madness has already started since the calendar turned March. Some of the smaller conference tournaments are under way and there was a massive upset last night with Hartford being Albany in the America East – my favorite small conference.

If you’re a college basketball fan get comfortable on the couch starting Saturday as we have final games of the regular season and conference tournaments beginning. We’ll have you covered here at Barstool with conference tournament breakdowns and predictions next week, but until then we opened up the mailbag for one of the last ones of the year.

Again, had a ton of great questions for the mailbag. If you have more or I didn’t address something, let me know @barstoolreags

Our guy Rico chiming in here and I’m likely going to piss him off with this answer. First off, we set a rule that you can’t take a team that’s already together (Gus Johnson/Bill Raftery) and you can’t put together a crew that’s been a staple (i.e. the old Big Monday crew of McDonough/Raft/Bilas). Obviously those are the two easy answers, that’s why that’s out. We’ll go a step further and give away a studio crew as well.

I can guarantee you who isn’t on this list. Bill Walton. A lot of people love Walton, but personally I can’t stand him calling a big game talking about the dirt in Temecula and providing nothing toward the game. It’s embarrassing Dave Pasch gets stuck with him since Pasch is a good play-by-play guy. When I listen to a game, I want the analyst to teach me something. Break down a play, break down why a team is running a specific defense. Walton is too busy blasting Ben Howland and being high as balls to do that for me.

Play-by-Play: To me there’s a top 4 here in Gus Johnson, Brent Musburger, Sean McDonough and Dan Shulman. Being the degenerate I am, I’m going to give Brent the nod here just barely also, it keeps Raft alive for an analyst spot. I’ll take Brent getting excited and talking about his friends in the desert. He’s a legend.

Analyst 1: Bill Raftery. No doubt the No. 1 pick for me is Raft. He’s got the catch sayings and can break down the play just fine.

Analyst 2: Here’s where I’m going to piss off my guy Rico. Give me Doug Gottlieb. Say what you want about him, there’s no one who sees the game better than Gottlieb. He has the experience as a great point guard at a high level and will explain why a team ran a certain play. He brings more to the teaching aspect of the game than any other analyst. He’s always well prepared for games and isn’t afraid to say something negative about a player/team if they aren’t playing well.

We’ve talked a lot about the mid-majors everyone seems to love this year – Chattanooga, Arkansas Little-Rock, Valpo and Monmouth. So, we’ll rule them out and take a look at two other mid-majors that could give some trouble. Hawaii is a team to watch as they sit at 23-4 on the year and the favorite to win the Big West. Is their resume going to blow anyone away? No. But, they do have wins over Northern Iowa, Auburn and swept UC-Irvine while also playing Oklahoma to a 3-point game. Hawaii likes to play uptempo and is effective at shooting the ball inside the arc – 16th best in the country. They also get to the free throw line, as they rank 5th in the country in free throw attempts per field goal attempts. The other team to watch is Yale, who is looking to crack the NCAA Tournament for the first time in over 50 years. They have a great frontcourt in Justin Sears and Brandon Sherrod who will absolutely give a team some trouble.

For the sake of argument we’ll use the latest Bracketology by Joe Lunardi for seeds 8 or lower. The first one that jumps out is Vanderbilt as a No. 9 seed. They have NBA talent, especially in Damion Jones and a helluva guard in Wade Baldwin. They have a frontcourt that can stretch the floor as Jones has a midrange shot and Luke Kornet is 7’0” and can shoot the three. They can beat you from the outside as well, especially if Matthew Fisher-Davis gets hot. They were a top-15 team in the preaseason and talent wise they are easily one of the 25 best rosters in the country. Kevin Stallings is a good enough coach to upset a No. 1 team, especially this year. On top of all that, they rank in the top-33 in AdjD and AdjO and have won 4 games in a row.

I never would have guessed during my first year here on the Stool that we have so many A-10 basketball fans outside of UMass. But, you learn new shit all the time so here we are. Look, I know Dayton is struggling as of late, but I trust them the most out of the A-10. The main core of their roster has been here the last two years that saw a run to the Elite Eight and Round of 32. They have the best coach by far out of this group in Archie Miller, who is one of the 10-15 best coaches in the country. On top of that they’re strong defensively and I’ll chalk up the last couple weeks to the Kendall Pollard injury and then getting him back into the lineup. Am I 100% confident in Dayton? No. But, out of this list I’ll take them 10 out of 10 times.

Right now it’s looking like there will be five teams from the Big East in the NCAA Tournament. Xavier and Villanova are obvious locks, making a push for a No. 1 seed as they will likely end up there with the other as a No. 2 seed. Seton Hall is another lock for the NCAA Tournament as they are trying to improve from their No. 7/8 seed. Providence likely saved itself last night with a win over Creighton despite not looking the best outside of Kris Dunn and Ben Bentil – a broken record, I know. But, a win over St. John’s on Saturday and they finish 10-8 in the Big East, which will give them a likely No. 8/9 seed, though they may fall to a No. 10. Butler is in the same boat as Providence as they are 9-8 in conference play now after the home win against Seton Hall – which is a quality win as well. If they beat Marquette on Saturday, they secure a bid and likely avoid the First Four. Right now that’s what Butler is playing for.

John Groce should be safe, but he’s not. That’s just the nature of the beast when a new AD comes into any college. Groce has had a ton of bad luck with injuries and he’s a decent coach. However, it all depends on what narrative the AD wants. He could easily clean house across the department just to make a point. Would Bryce Drew be interested? No, he shouldn’t be. He can pick and choose what college he wants to go to and he’ll likely get a better job than Illinois.