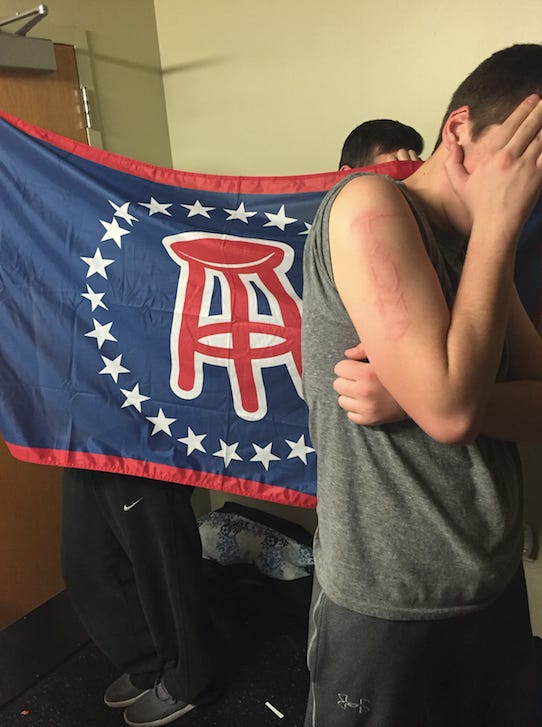 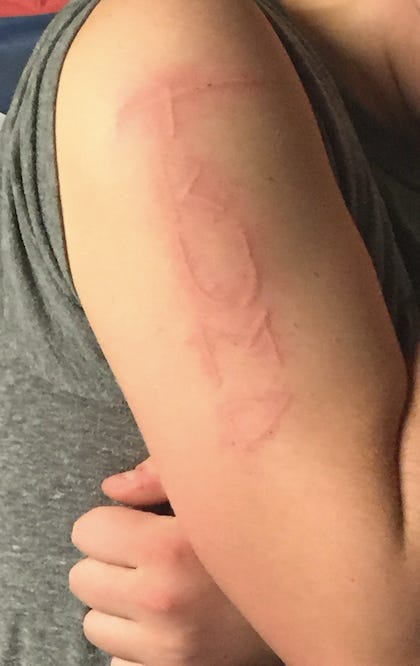 Late last night we get this “We support Trump” email and, after I opened it with en eye roll, I discovered this picture. To say I was flabbergasted would be an understatement. I immediately replied, “Did he brand that into his arm?” and shortly thereafter received a clarification, “No. Carved it with a knife.” I could practically hear them scoffing as they typed out that email. Brand ourselves? Ha, we’re not fucking idiots.

Honestly, of all the emails we’ve ever received, this might be the most outrageous one. A stoolie carved “Trump” into his arm. With a knife. Go ahead, go back and read that. I’ll wait.

Ever see an NFL player from one of the black frats with the big scar on his arm and think, “Bet he regrets that. That looks ridiculous”? Now imagine if it was the name of an Oraguntan-haired reality TV host/Sharper Image steak salesman rather than a Greek letter. That’s what this poor guy has to look forward to. Tattoos are often dumb, so this kid won’t be alone. But at least a lot of bad tattoos can be explained away with a quick story, this stoolie’s got a liftetime of explaining, “Well yeah, I grabbed a knife and just started cutting myself. For Trump” to horrified onlookers. Might want to start mixing in some curls. People will be less apt to make fun of you if you’re huge, I know I’d never say “You were a fucking Beta?! BYAHAHA WHAT AN IDIOT!!” to any of the aforementioned NFL guys.