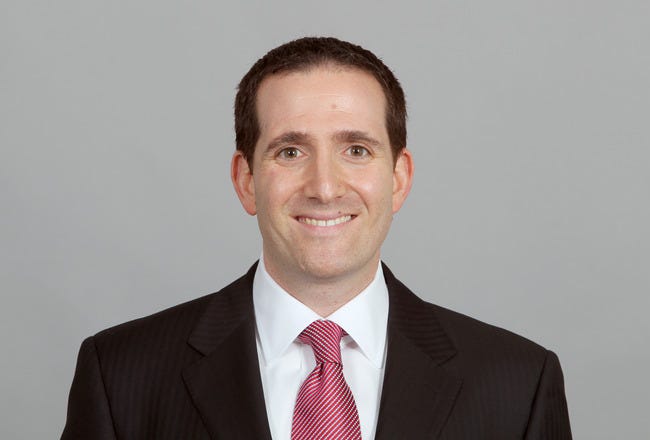 NJ.com – After signing Sam Bradford to a two-year contract on Tuesday the Eagles next order of business is looking ahead to free agency opening next week and at least one NFL insider expects the team to follow its recent modus operendi and be big players in the market. “I just expect them to be aggressive,” ESPN NFL insider Adam Schefter told 97.5 FM The Fanatic on Wednesday. “That’s just how they’ve been. That’s been their history. When Howie’s involved, he just can’t help himself. That’s who he is. That’s his make up. He’s always wheeling and dealing, signing, making moves and never stands pat. I don’t expect that they will stand pat.” “They’ve been so busy, when you see all of the moves that they’ve already made … Lane Johnson, Malcolm Jenkins, Vinny Curry, Zach Ertz and Brent Celek. They’ve just been wheeling and dealing. Obviously, signing Sam Bradford is the most significant re-signing of all. Obviously you still have the Fletcher Cox deal.” Schefter isn’t the first person to intimate that the Eagles will be aggressive this offseason. A league source who requested anonymity told NJ Advance Media shortly after Doug Pederson was hired as head coach that they expect the Eagles to be big players once the market opens on March 9.

AWESOME. Why hire talent evaluators and build a destiny by picking the right players through the draft when you can go absolutely apeshit on the FA market? Exactly. There is no reason when Howie Roseman with his tits to the griddle. He’s proven himself before at GM by building a successful franchise through free agency. Remember that Dream Team he made in 2011 that made the Eagles a next level Super Bowl team? Nhamdi, Vince Young, Cullen Jenkins, and let’s not forget about that amazing ’11 draft that featured a 26-year-old firefighter in the first round. I’m SHOCKED those acquisitions didn’t lead this franchise to multiple championships (but instead it took a 2010 playoff team to records of 8-8 and 4-12). This ain’t Howie’s first rodeo putting together a squad. Let’s all sit back, relax, and blindly follow our fearless shrew into this year’s FA period.

I’ll relent and give credit where credit is due with Howie and money. I initially spazzed at Sam Bradford’s deal because that’s my reaction to every thing green nowadays, but it was a splendid contract for the Eagles. But FUCK, Howie Roseman is not a team builder or talent evaluator. Stick him in a locker, hire someone to bring in the personell, then let Howie out to hash out the numbers. Because I can’t, nay, won’t allow this city to go through another fuckfest that was 2011.

Oh, and I’ve been in contact with a source with the Eagles that’s been dishing info about how things were going at the combine. Read this text and tell me you wouldn’t be just as fired up about this clusterdick of a front office: 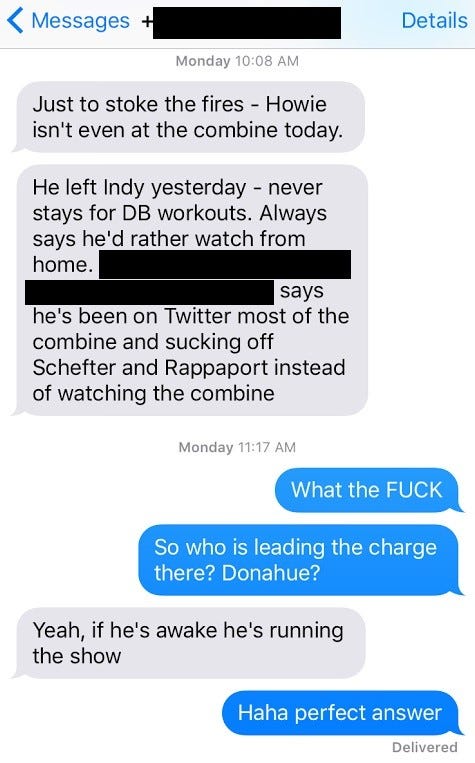 Yup. Hold onto your butts.