The Hogan vs Gawker 100 million dollar lawsuit got off to a hot start yesterday with Hogan cutting a promo against Gawker and then showing up to court in his nicest bandana. 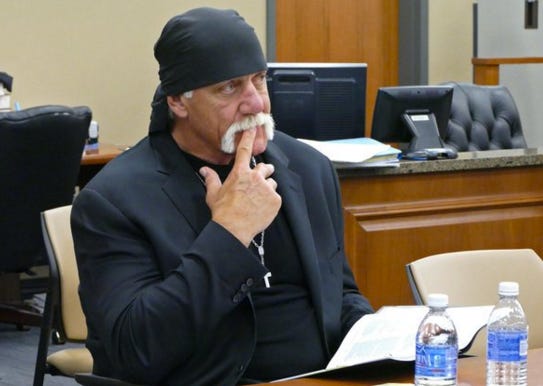 Today, jury selection continued and it was as Florida as imaginable. Jury selection is a funny thing- they have to find people who have no bias one way or another about the case, which usually means the dumbest of the dumb get selected. Anyone who doesn’t have a prior feeling about Hulk Hogan, porn, or sex tapes lives under a rock/is borderline retarded. And that’s how you can kill Nicole or drown your baby in a bathtub and get away with it. Jury selection. And it looks like we have winners on winners on winners lining up to hear this case.

More like LAMEstream media. Probably got bumped to the front of the list. Good to have guys who get their news from Nookie Chat deciding 100 million dollar lawsuits. 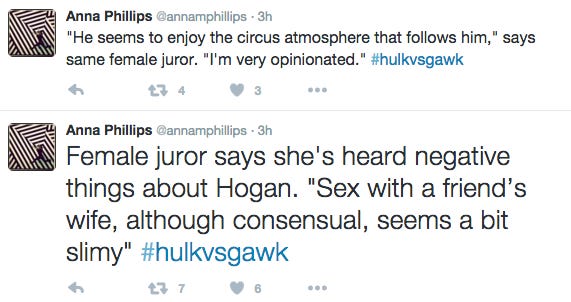 Kinda curious why this didn’t come up earlier, as this potential juror went all day yesterday without mentioning she was opinionated about this case? I went to jury duty and was out of there in 5 minutes, yes, I do have pre-formed opinions about people who break and enter and steal shit, your honor.

But fret not, not all people were excused. I present, Florida:

I’m wondering if you can have seen the tape before the trial and still serve on the jury. They’re going to show the tape anyway, it’s better that they have seen it so they aren’t as likely to get a chubby and have to tuck a boner into the waistband in the middle of the court room.

I cannot wait for this trial to get into full swing. Hulk Hogan sex tape+Gawker being sued for 100 million+Florida jury= liquid magma gold.

PS: Judge throwing shade! (Not at us though. We do great investagatory journalism here, of course.)