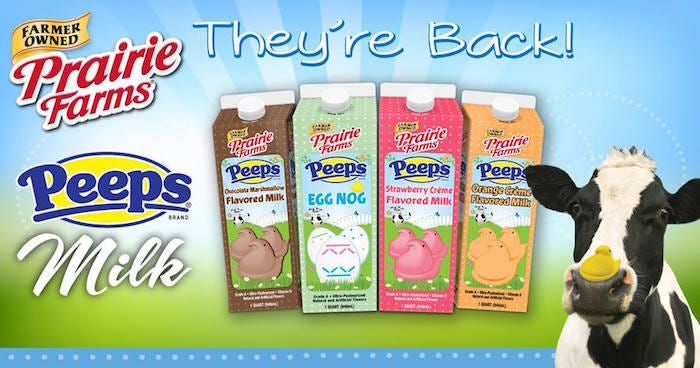 Consumerist- In case you were worried that you would have to face a spring without Easter egg nog and Peeps-flavored sugar milk, don’t fret: the good people at Prairie Farms haven’t just brought back those springtime beverages, but they’ve expanded the line, even adding a Walmart-exclusive orange creme flavor. This is the first year that the Peeps beverages will be available nationwide, and the company is celebrating by sending their chef to Just Born headquarters in Pennsylvania with a basket of milks and a performer dressed as a Peep that has suddenly sprouted legs.

Just vile, vile shit right there.  Peeps are legitimately the worst thing about Easter.  Worse than a giant bunny being the mascot, worse than black jellybeans, worse than being on a Sunday so you can’t get a day off from work.  And what do you do with a product that people despise?  Liquify it.  Just gross, man.  I can still remember each time I drank spoiled milk.  That’s one of those tastes and experiences that just burns into your brain.  And I would take a full gallon of that over a teaspoon of Peeps Milk.  Bootleg Easter egg nog.  When Wal-Mart has its own flavor, you know it’s for the poors.