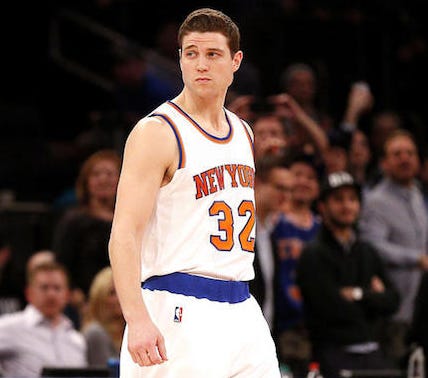 Grand Opening, Grand Closing on Jimmer Fredette’s time with the Knicks. I guess Jimmer just couldn’t stick on a roster where studs like Sasha Vujacic are getting minutes on a team 12 games under .500. I mean not even Jerian Grant can get minutes as the Knicks hunt for the playoffs. What’s that? Our playoff chances are more dead than Cespedes’ hog? Oh. Well at least Kurt Rambis has proven to be a revelation at coaching. That’s right, I forgot that he makes Derek Fisher look like Gregg Popovich. Now if this move leads the Knicks to signing the newly waived Ty Lawson, I’ll be at peace. Sure bringing a guy that has reportedly had issues like Lawson to New York is red flag city. But desperate times call for desperate measures. Then again, if Vujacic keeps logging minutes over Grant and any other talent that should get a fresh look, none of this even matters.

I’m obviously bummed for Jimmer. The guy had no real opportunity to try to shine in New York, but in the end he was just another guy on a 10 day contract. That’s just how it goes. I would have loved to see a guy with range from the Hudson to the East River get more burn. But he is likely the player that we all know he is. Jimmermania is like Tebowmania. He gets the fan base excited as they hope/pray he recaptures that past glory while the franchise likely hates that he is getting his name chanted while he sits on the bench. But saying the names “Jimmer” and “Tebow” is just fun. But when it all flames out, you are not exactly shocked.

But now we have to look at the glass half full. You would have to think that this move leads Jimmer back to the Westchester Knicks, who are in the thick of a D League playoff hunt. Do the right thing, Zen Master and put Jimmer back on the Dub Knicks. The County Center Crazies demand it!