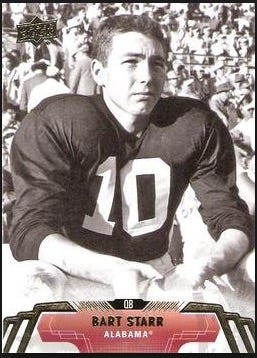 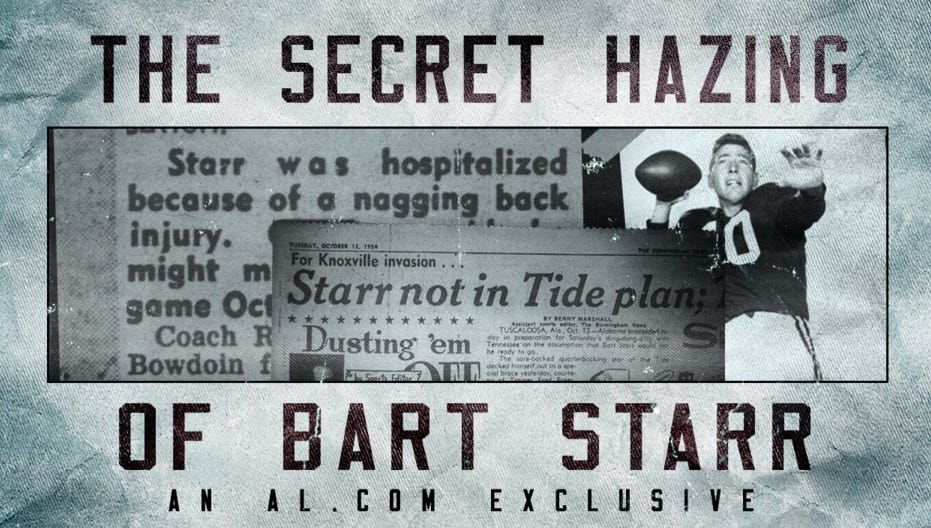 Alabama – They beat Bart Starr with a wooden paddle until his back resembled a piece of raw meat. The quarterback was never the same again.

For more than 60 years, Bart Starr and his wife, Cherry, have kept a dark secret hidden away from the narrative of the Hall of Fame quarterback’s career. No more. One of the most respected football players in the history of the game, and arguably one of the toughest, was hazed so badly while at the University of Alabama that it derailed his college career, disqualified him from military service and affected him throughout his 16 years with the Green Bay Packers.

In an exclusive interview with AL.com, Cherry Starr debunked the cover story used about why Starr’s career at Alabama fizzled before his junior season, and why he struggled with back pain throughout his storied NFL career.

So this was some huge exposé published yesterday about “THE TRUTH” behind Bart Starr’s lingering back problems that derailed his college career and lasted well into the NFL. No it wasn’t from a “kicking incident.” Wasn’t anything that happened in practice or the weight room.

It was some good old fashioned Alabama hazing.

It has long been accepted that Starr hurt his back during a punting exercise at Alabama. That is false, says Cherry Starr, who was with him at the time and throughout his life. Cherry told AL.com the truth is that Bart’s injury happened during a gruesome ritualistic paddling for initiation into the university’s A-Club for varsity lettermen.

“He was hospitalized at one point in traction,” Cherry said. “That was in the days when they were initiated into the A-Club, and they had severe beatings and paddling. From all the members of the A-Club, they lined up with a big paddle with holes drilled in it, and it actually injured his back.”

“But his back was never right after that,” Cherry Starr said. “It was horrible.

The “A-Club” is a group for varsity lettermen, officially there to “help to organize alumni activities and events and support Tide scholarships.”

Also, apparently to toughen up guys like Bart Starr. I mean, they beat the absolute SHIT out of him.

“It was not a football injury. It was an injury sustained from hazing. His whole back all the way up to his rib cage looked like a piece of raw meat. The bruising went all the way up his back. It was red and black and awful looking. It was so brutal,” Cherry Starr said.

Germanos served in the Marine Corps for 3 ½ years following his graduation from Alabama. He said hazing for the A-Club was worse than anything he experienced in the military.

“It was hell,” Germanos said. “Lord have mercy it was a rough initiation.”

When a Marine vet says your initiation hazing was worse than anything he encountered in training, you know shit got weird.

Anyway that all sounds pretty horrible, you never want to have your back looking like “raw meat” just to be able to fit in with a group. But quick counterpoint, just to play devil’s advocate – it did DQ him from military service, and he ended up turning into a Hall of Famer and NFL legend known for his toughness, sooooo…kind of a point for hazing right?