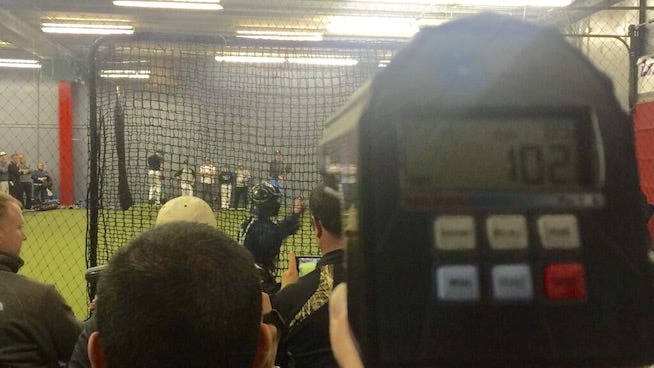 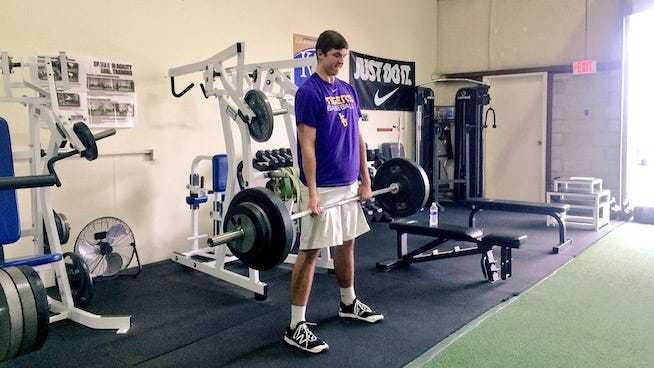 Stack – During the Premier Baseball Pro Day Showcase, Riley Pint, a senior at Saint Thomas Aquinas High School in Overland Park, Kansas, hurled a fastball 102 mph. And he’s only 18 years old. Pint is regarded as one of the top MLB prospects in the nation—PerfectGame.org ranks him number one. He is committed to LSU and is a likely top-five pick in the 2016 MLB Draft. Some scouts believe he will go first overall. His trainer describes the 6-foot-5, 225-pound pitcher as an explosive, rhythmic and coordinated athlete. In fact, Pint was also an All-State basketball player during his junior year—once scoring 32 points in a game. He has a 60-inch Box Jump (shown in the video player above) and he can touch 11 feet, 3.5 inches on a Vertical Jump, which is slightly better than NBA stars Klay Thompson and Damian Lillard.

Hey kid, screw LSU. If you’ve already got Steve Nebraska stuff then it’s time for the show. A pure freak of nature that doesn’t need college ball to mature. Watch the video of him pitch. That POP into the catcher’s mitt is borderline orgasmic. The best part about this kid is he’s only 18. Which means by his major league debut for the Phillies when he’s 20 he should be consistently clocked at 120 MPH. Seriously though with his body type he could be firing Chapman/Syndergaard type gas for a long, long time. I’m not saying the Phillies should get this guy, but when there’s not a clear cut prodigy destined to go #1, all options should be on the table. Bryce Harpers and Pat Burrells don’t grow on trees.

And yes, Pat Burrell was hands down the right selection for the Phillies last #1 overall pick (after JD Drew became Judas). The guy was arguably the greatest college baseball player to ever play the game. And, yes, this is a good spot to revisit some Pat Burrell Legends because AMERICA:

5. Reader Email: Pat The Bat And The Morning After

Not sure if you heard this one before but supposedly my buddys cousin took Pat the bat back to her place home from the bar. She woke up early in the morning to go to work so she left her number and a pop tart on the counter. When she got home she saw that the pop tart was gone but her number was still there. Pats a legend.

Read all of the Pat Burrell Tall Tales here.