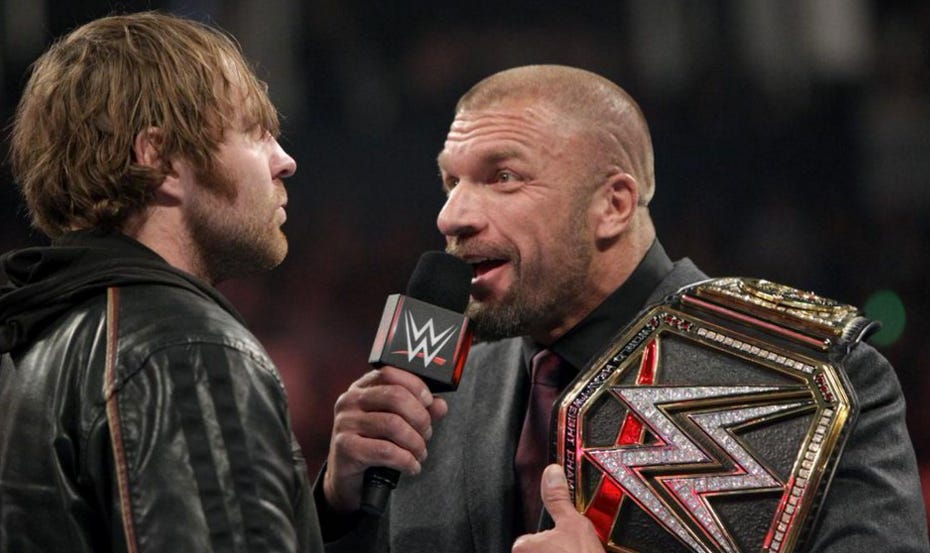 Let’s talk about Raw last night. While Roman Reigns was sitting at home recovering from a little nose surgery, Dean Ambrose was given the slot that otherwise would be reserved for Reigns. And all it did was prove that Reigns is not even close to ready to be the top face of the company. Now, we’ve known this for quite a while, but watching Ambrose casually and naturally go nose to nose with HHH on the mic made it that much more clear. Reigns has never delivered a promo that doesn’t sound contrived or forced. He’s so unnatural in everything he says, almost as if he’s doing an impression of someone doing a John Cena impression. Ambrose is natural with it, especially last night when he wasn’t forced to impersonate a drunk step-dad at a family BBQ.

If you flash back 2 weeks, you recall last Monday night on Raw when HHH beat the shit out of Reigns, and the crowd wanted more. There it was, HHH, the biggest, meanest guy in the company, getting standing ovations and the crowd going crazy for beating up who is supposed to be the face of the company. Now lets go back to last night when HHH beat the shit out of Ambrose…and low and behold, the crowd was not into it. Everyone was on Ambrose’s side. Interesting, right?

Now, of course what they are going to do is what they did when Daniel Bryan was the most popular person on the roster but wanted it to be Cena…they are going to use Ambrose as a pawn to try and get Reigns over with the crowd. And using this tactic will fail for the 9,000th straight time. Because for the 9,000th straight time, you can’t just force a crowd to buy in to someone. You can’t force fans to connect with someone they don’t connect with. Reigns has no connection to the audience, especially the way they write his character.

The best move, in my opinion, is a no-brainer. You make Reigns super-heel and thus starts a Rock vs Austin-esque feud between Ambrose and Reigns. Shit, throw a healthy Rollins into the mix too. If they are going to continually force Reigns to be a main eventer, at least make it interesting. And the way to do that is by having him be a monster heel who doesn’t talk much, just beats the shit out of people. And just like it’s worked so many times in the past, that type of heel ends up going over with the crowd because at the end of the day, people like carnage.

I’m still wondering if they really are okay with Reigns winning at Mania over HHH and getting no reaction. Can’t really imagine a crowd sitting through a 4 hour show and then going nuts for a guy that they didn’t like to begin with. Or will WWE re-write it? Ambrose has a title match with HHH at a WWE Network special on March 12th. What if Ambrose wins the title? Will they allow that to happen? All along it should have been Ambrose vs Lesnar and HHH vs Reigns. But Vince just couldn’t help himself but to put his hand-picked guy Roman Reings in the main event. Just couldn’t help himself. I want to like Reigns, I really do, but his character makes no sense as is, and the writing does him no favors.

About a month away from Mania now. We’ll have to see if they make a last second swerve, because as of now, it’s going to be another awkward moment if Reigns really wins the title at Mania.