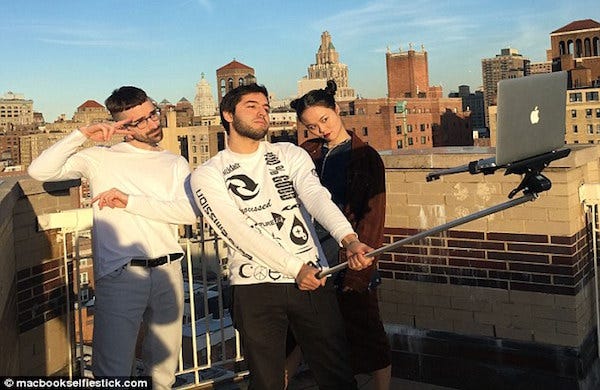 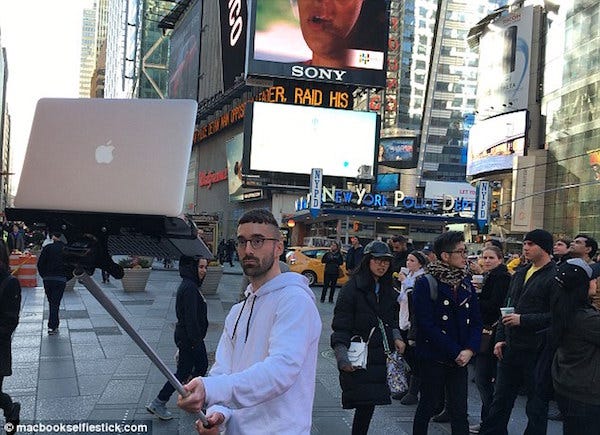 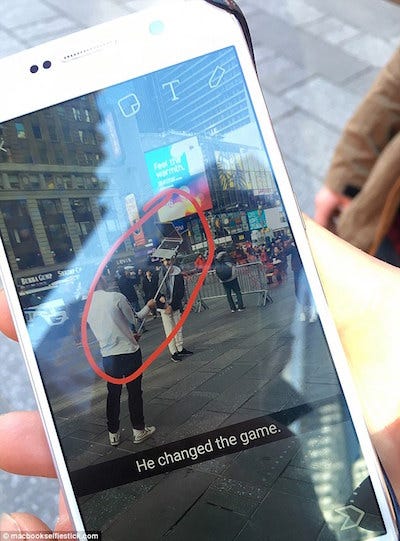 Daily Mail- Prepare for a major eye-roll: Three imaginative young men in New York have dreamed up — and created — an industrial-strength selfie stick, big enough to support an entire laptop. The Macbook Selfie Stick functions just like a smartphone selfie stick — except that it can fit a full-size Macbook computer in its grips. And while the invention will likely seem ridiculous to many, it’s worth noting that so did the original selfie stick, once upon a time — and now the tech accessory has become so ubiquitous that theme parks and museums have been driven to ban them.

However, early adopters can’t exactly buy the photo-taking tool just yet — and in fact, there only seems to be a single prototype.  Created by artists Moises or Art404, John Yuyi, and Tom Galle, the Macbook Selfie Stick is, at this stage, still just an art project.  But while the trio may be trying to make some sort of statement about society — that our culture is too selfie-obsessed, self-obsessed, or tech-obsessed — it’s quite possible that their plan will backfire.

In a series of images posted online, the group and a few volunteers can be seen using the Macbook Selfie Stick out and about in Manhattan.  They pose for pictures, their laptops held out on a pole several feet in front of them, in places like Times Square and Washington Square Park.  In several of the snaps, crowds of tourists can be seen nearby, and many seem unfazed by the spectacle — sometimes too busy taking their own selfies to even notice.  A few, though, look on with bemused expressions — even in Times Square, where strange and never-before-seen scenes are, actually, seen every day.

Do I hate bumping into tourists that are taking a million selfies in some random part of New York?  Of course.  Do I get embarassed when my parents take pictures with their enormous iPads while their iPhones sit in their pockets?  Definitely.  Does the Macbook Selfie Stick seem like something out of a fucking Zoolander movie and the fact that people actually like them is mindblowing?  Yes.  But you know what I hate more than all of that?  Artsy assholes telling me that our culture is too focused on selfies and technology.  Get the fuck out of my face with that shit.  I mean selfies suck, but we don’t have personal photographers following us around to take pictures.  And technology is AWESOME.  I think it was Louis C.K. who says the beest time to be alive is right now because you can do whatever you want with WiFi, phones, etc.  So if I have to buy a Macbook selfie stick to prove a point, so be it.  If these people are just posing as douchey artists to make people hate buy their product, then I will just tip my cap and give them my common man’s money like all the other sheep in the world because fuck them.