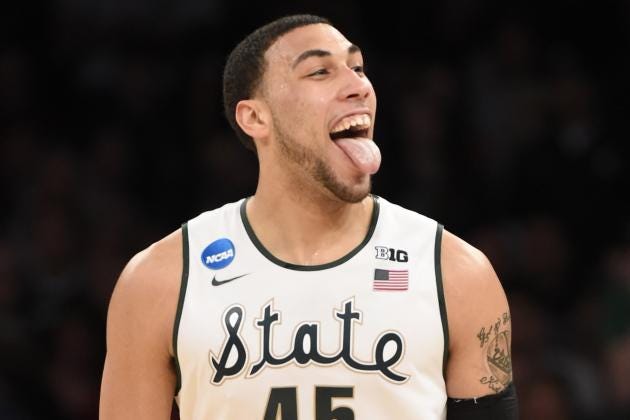 Here we are college basketball fans. The calendar is March, which is the greatest month of the year. Don’t at me.

As I said yesterday we’re going to take inventory of where we are heading toward the end of the season. So, today let’s take a look at the major conferences (plus the American) with a recap of conference play, my Player of the Year pick, Coach of the Year, Rookie of the Year and All-Conference Teams.

On top of that I’ll make my pick for All-American and other national awards. Agree with me? Congrats, you’re smart. Disagree with me and want to tell me I’m a Goddamn idiot? Let me know @barstoolreags

Recap: The conference is absolutely down this year and SMU not being eligible for the postseason is a massive letdown for the AAC. Cincinnati and UConn have both had massively disappointing seasons, considering what the preseason expectations were. However, there’s a chance five teams can get into the NCAA Tournament because of how open the AAC Tournament is. The problem though is no team will likely be a better seed than No. 7. There’s still a ton left to play for this last week because of the logjam at the top. Temple and SMU are tied at 12-4 in conference play with Cinci just a game behind. If that’s not enough, Houston, Tulsa and UConn are all just two games back with six losses.

Recap: Much like the AAC, there was some dark moments in the ACC due to Louisville’s postseason ban and Grayson Allen tripping everyone. After a rough start on the road in conference play, Virginia caught a break coming back against Wake Forest, which absolutely turned the season around for both of those teams and turned Virginia into one of the five best teams into the country right now. UNC was the hands-down favorite before the season, but they turned into an inconsistent team and are currently tied for the ACC lead with Miami, who has been one of the biggest surprises this year. Miami is led by a bunch of experienced transfers and run the pick-and-roll with Sheldon McClellan better than almost everyone in the country. It will be a battle down the stretch as Miami has to go to Notre Dame and Virginia Tech, while UNC ends at Duke. Virginia can steal the title going to Clemson and getting Louisville at home on Senior Day.

Recap: The absolute best conference in America was won again by Kansas. For the 12th fucking time in a row. Winning regular season titles are starting to lose its luster because of unbalanced schedules, but the Big 12 plays a round robin schedule, so this is the best streak in college basketball we’ve seen. Just stop picking against Kansas in the Big 12 in the preseason. One day we’ll all learn. Every team besides Oklahoma State and TCU are above .500 with a chance to make the NCAA Tournament.  We were also introduced to Buddy Hield, who was the most entertaining player to watch since Jimmer. That Kansas-Oklahoma 3OT game will be talked about for years.

Recap: The conference was supposed to take a major step forward. Well, that didn’t happen at all. There are really only three good teams in the conference this season being Villanova, Xavier and Seton Hall. St. John’s is lucky Rutgers is so bad so people don’t talk about them being the worst team in the major conferences. Providence, Butler and Georgetown all fell flat on their face and are trending toward the bubble or outside of the NCAA Tournament. Villanova all but locked up the Big East crown yet again sitting at 14-2 in conference play with Xavier two games back after losing to Seton Hall. Before Xavier fans get pissed off no one is on the All-Conference Team, they are so balanced it’s tough to give Bluiett or Sumner the edge over a player like Ellenson or Whitehead.

Recap: So Indiana won the regular season, huh? That’s the benefit of the unbalanced schedule as the Hoosiers currently have the easiest strength of schedule in the conference. The Big 10 is down this year – ranked 5th in KenPom – because of teams like Maryland, Wisconsin, Purdue and Michigan not playing to the preseason hype. The bottom half of this league is incredibly weak with Northwestern, Illinois, Nebraska, Penn State, Minnesota and Rutgers all sucking. However, Michigan State looks like the second best team in the country right now thanks to Denzel Valentine. Watch how Indiana ends the season playing Iowa and Maryland.

Recap: Perhaps the most surprising conference as a whole this season has been the Pac-12 and for good reasons. The conference is ranked as the 3rd best on KenPom and could send as many as eight teams to the NCAA Tournament. Utah and Oregon are two of the best teams people aren’t talking about and Arizona is starting to get healthy at the right time. The drastic improvement of USC and Washington has helped improve the conference as there are no throw-away games besides Washington State now. The biggest problem with the Pac-12 is late starts and Bill Walton calling the games. Dude sucks.

Recap: The SEC did take a step forward, but the conference still has left a lot to be desired. Obviously Kentucky couldn’t repeat what it did last season, but the real embarrassment is LSU. It’s been harped on quite a bit but Johnny Jones ruined Ben Simmons and a talented team, to where they are fighting for a NCAA Tournament berth. South Carolina was the surprise team this year and saved Frank Martin’s ass from the hot seat thanks to making the NCAA Tournament for the first time in over a decade. There’s still plenty to sort out down the stretch as five teams are all within a game of each other for first place in the conference.