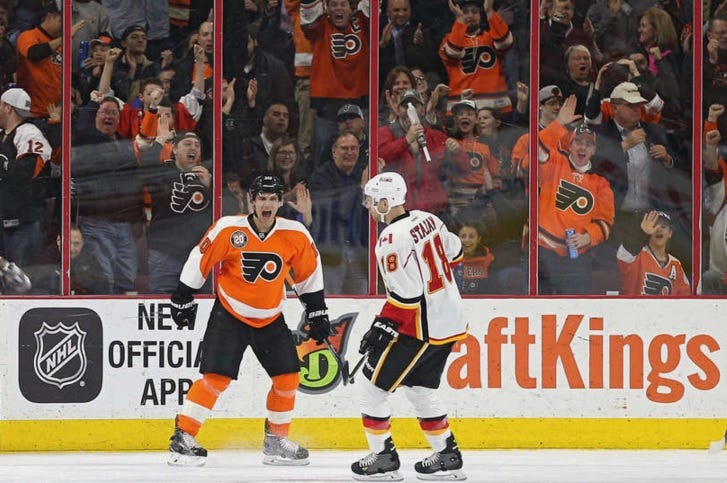 Well make that 3 wins in a row for the boys who continue to hang right around that 8th and final playoff spot. Just 3 points behind the Penguins for that last wild card spot with a game in hand and still 3 more head-to-head match ups to go. Before we get into last night’s game, however, real quick shoutout to former Flyers legend Jim Watson for being inducted into the Flyers’ Hall of Fame. 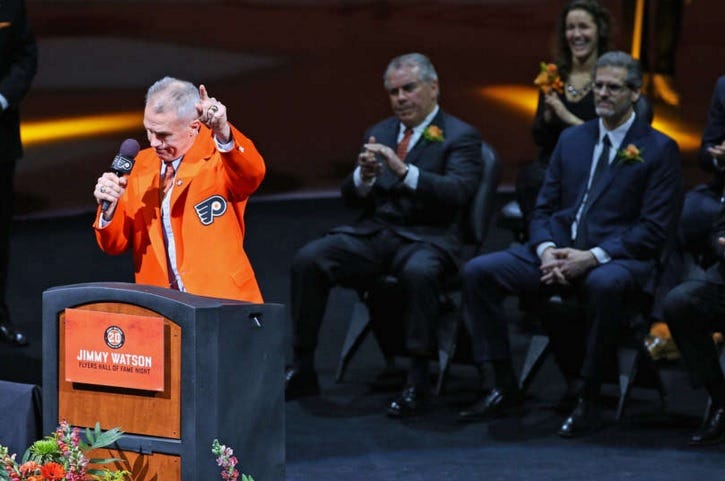 That coat is a 1000/10. Anybody who has ever played at Ice Works still has nightmares of Jim Watson’s screaming voice to this day. Things got a little off the rails during his speech when he started to talk about church, but a well-deserved honor nonetheless.

“Hey Jim. You’re a 2-time Stanley Cup winner. A 5-time NHL All Star. You played on the same team as your brother. What was your favorite memory of playing in the NHL”

– Let me tell you a little something about our lord and savior Jesus Christ.

Brayden Schenn clearly scored a goal the shift right before this. Anybody with at least one eye could have told you that the puck crossed the line before Hiller got an arm on it. But whatever. Because as the old saying goes, “Puck don’t lie, bitch”. (Buy a shirt)

So the next shift, Claude and Schenn just go right back out there and make it happen again. There’s no question about that one crossing the goal line. But I guess Brayden Schenn is a little late to the party and JUST started following DJ Khaled on snapchat. Because he went for another one

That makes for 12 goals and 11 assists since Brayden’s brother Luke was traded from Philadelphia. Schenn has been on fire since he’s been the only Schenn in the city and it makes sense. We all act more like ourselvs when we’re just with our friends and our family isn’t around. When your family is around, you’re a little more reserved, not quite as much of a shit head. But now Brayden Schenn just gets to be himself and that means he gets to make it rain hats in the Wells Fargo. He’s gonna need to stop scoring soon, however, because I don’t want him thinking he can squeeze anything more than $4 million out of the Flyers in negotiations this summer.

An Apple A Day Keeps The Doctor Away. Or 4 Apples If You’re Claude Giroux

2 primary assists and 2 secondary assists on the night for Captain Claude. On the ice for all 5 goals and had a helping hand in 4 of them. Not bad. Not bad at all. This team is in such a weird spot right now. You never want to be the first team that doesn’t make the playoffs. Because then what? Your season ends in early April and then you have to wait until June to get a shit draft pick. So I guess we just have to say fuck it right now and hope for the playoffs. And Captain Claude is the guy who is going to make that happen. The Flyers are without Jake Voracek for 2 weeks now which is obviously a huge blow to this lineup. But that top line last night of Schenn-Giroux-Simmonds was ridiculous. 3 goals for Schenn, 2 goals for Simmonds, 4 assists for Claude. If they can keep their numbers even close to what they did last night for the next few games, then missing Voracek won’t be as much of an issue. Still kind of fucks everything up on the 2nd line but we’ll get to that later.

Flyers fans are going to love watching Laughton and Cousins play together on that 3rd line for plenty of years to come. They didn’t do anything that ended up on the scoresheet last night but these fuckers have to suck to play against. If you’re matched up with their line, you’re not going to have an easy shift all game. They forecheck hard and they grind shit out in the corners. They’re a pain in the ass and have the ability to produce offensively. You can’t really ask for much more out of your 3rd line. I’d eventually like to see Leier again up with those guys instead of Read but we may have to wait for that. Also thought VandeVelde played a solid game last night, same way as these two.

– The least noticeable line out there last night was Raffl-Couturier-Gagner. They had a few chances here and there but that was about it.

Radko Gudas should never be leading a rush. If he has the puck on his stick past the red line, he should be forced to just dump it in the zone. That should be explicitly written in his contract. Instead, he tries to get fancy and turns it over at the blueline. Calgary skates down the other end of the ice and boom, goal. Next shift, Giroux tries to get fancy with a pass, Calgary takes it down the other end and scores. 2 goals in under a minute because of two bad turnovers. Neuvirth could have been a little stronger on the 2nd one but still, there was about a 5 minute span in the 3rd period that I was almost positive they were going to blow this game.

– Andrew MacDonald is very good at being very bad at hockey. I know he had an assist last night but ho boy is he terrible. Just so weak at getting the puck out of the zone is ridiculous. I’d imagine it’s a confidence thing which would make sense if you’re a $30 million man playing the majority of the season in the AHL. But it was a tough night all around for AMac.

– Connor McDavid makes his first appearance at the Wells Fargo Center tomorrow night. Let’s get it.