This folks is what happens when your faith is being rewarded. I’m almost at a loss for words (ha yeah right theres about 5,000 comin your way) when it comes to describing this team. They are breaking up everything we thought we knew about NBA basketball. When you describe them, you have to use corny basketball buzzwords like “chemistry” and “effort” and “team”. Things you usually say when a team sucks. But that’s whats crazy! That really is how this team is winning. They just don’t quit. Ever. We’ve been trained to think that you need that transcendent talent to have any real success in this league. That without the “go-to” guy, that “franchise” guy, you won’t have much of any success. Now please, I understand this team hasn’t done anything in the playoffs, which is when things REALLY matter, but that in no way discredits what we are seeing.

We are seeing that great coaching really can make a difference. We are seeing what happens when players start to develop and appear to be more confident with each win. We are seeing Celtics basketball. A bunch of guys that don’t work on their own, but work flawlessly together. That’s I think what I love most about them. They play the right way every single night (Ok, well most nights).

With this win, the Celtics are now 20-10 at home, which makes the TD Garden the third toughest place to play in the East. Who saw that coming when they were 9-10 and couldn’t buy a win at home? Wild. Here’s why that’s important. As it stands now the Celtics are also the third best road team in the East (16-15) and if they’ve truly figured out how to win at home, they are going to be a tough out for someone.

With so much to get to, let’s not waste another sentence.

– First billing for this was a hard one for me. Almost impossible to choose, but this is why I get paid the nonexistent big bucks. To make the tough decisions. We begin with Avery Bradley’s bounce back performance. If there was any question about his ankle heading into this game, his 37 minutes (led the team) answered any doubts I had. His overall line was nice, 18 points on 7-13 shooting, but all I really care about is Avery’s fourth quarter. Avery led the Celts with 9 points on 3-4 shooting while playing all 12 minutes. That’s a big boy performance.

The good news, is it doesn’t end there. Let’s not forget about the defensive effort he turned in, holding Rodney Hood to 4-17 shooting. I don’t know what they injected into his ankle, but I’d like to order him 3 more rounds. 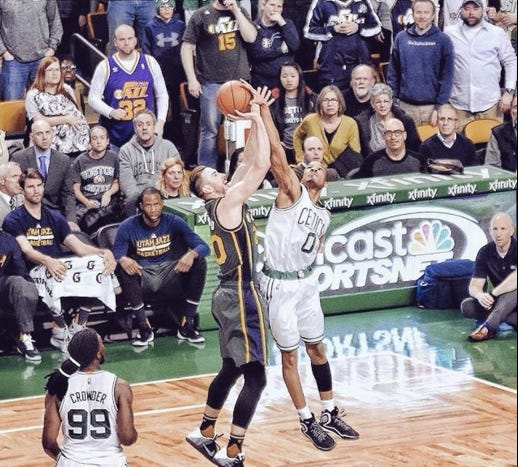 – I thought when the Celts had that fast break play in Denver that it summed up this team perfectly. Well, they outdid themselves. This sequence is WHY this team is so good. Chills every time I watch it.

Brad Stevens wants the C’s to out-hustle their opponents night-in, night-out. Seems like they got the message: pic.twitter.com/RcFb5LvmjB

- Not bad for #justaguy who all Celtics fans wildly overrate.

While he probably shouldn’t win it, why aren’t we hearing more about Jae Crowder in the Most Improved Player conversation? He is transforming right before our eyes. His second game winner in 4 days. Look at how he is shooting the ball! Efficient from the floor, multiple threes made in games left and right, hitting big time shots that guys like him aren’t supposed to hit. The way Crowder plays, and the impact he makes on this team, its like the Celts somehow captured 1/100000000th of KGs sweat and saved it all this time to genetically mix into Crowder.

So no, we don’t have that “one” guy to take the last second shot. What may be thought of as a weakness, in my mind is actually one of the Celtics biggest strengths. On any given game winning or big shot, the Celtics have four guys that defenses need to account for. That’s right, I said four. Avery, Jae, Isaiah, and Marcus have all shown the willingness to take these type of shots, and all have shown the ability to make them.

– You would think that since his shot has been struggling, teams would adjust to keep Isaiah out of the paint. Only, the exact opposite happened. I’m yet to see a PG who can stay in front of him, and he’s faced up on some elite guards. Isaiah lived in the paint last night, and when he does that, he’s going to make more than he misses.  With the size of Gobert, Lyles, and Favors you’d think Isaiah would struggle once he got to the rim but little > big. Oh yeah, he also did this.

– Now granted, the Celtics certainly struggled to score the ball, but when they did, they did it through unselfish play. Of their 37 makes, 27 were assisted. An assist percentage of 72%. That’s ball movement boys and girls.

– When you play like that, you can come back from 12 points easily. Which they did. Another example of their mental toughness. Start the game real shitty, stay in it, play good defense, close the game. This game had a lot of similarities to the Heat win, and this early deficit was no different. Back to back games coming back from 12 down is awesome and everything, but it makes me a little nevous. They cannot make a habit of this.

– Third game in a row. Big man running the floor gets in this blog every damn time.

A well-run fast break is a thing of beauty. Evan Turner and Tyler Zeller just proved it: pic.twitter.com/0X0tboZPHr

– Maybe the biggest news of the night for me at least, was that I learned Jordan Mickey is NOT Fab Melo. Last night was all I needed to see. He may flame out, or he may be a great defensive player, but at least he isn’t Fab Melo. What a relief.

– Celts got dominated inside. I mean an absolute beat down. Tre Lyles, Derrick Favors, and Rudy Gobert all with double digit rebounding efforts which included 11 offensive rebounds. They were just so much more effective at establishing position, and they feasted.

– It’s been a while since we’ve seen Jerebko get abused like that on the defensive end, but he struggled big time. Lyles ate him up and Jonas had no idea how to guard him. It’s also a shame that he got Mickey’s minutes in that third quarter, especially with how well Mickey was playing.

– Even though they made up for it, another poor shooting start reared its ugly head. It’s either the Celts start fast and have a slow third quarter, or they start slow and finish strong. Heart attacks either way.

– I cannot explain how much I hated that Sullinger three with 3:30 left with the Celts down 90-89. It’s why I felt that 21 footer he made a few possessions earlier was a bad thing, because I just knew he was going to keep trying jumpers since he probably didn’t want to get blocked/go to the line. There was absolutely nothing good about that play.

– Free throws. The Celtics were again very fortunate that leaving 9 points on the board didn’t come back to haunt them. The frustration comes not just from missing them, but who was missing them, which was basically everyone.

– Seemed like down the stretch the Celts would play 23 seconds of great defense, then give up a last second bucket. Need to close that out.

And the train just keeps on rollin. 60% of the way through this homestand, maybe their biggest challenge awaits. Portland has been playing just as well, and are coming off back to back road wins. If we’re being honest, things don’t get much easier for the forseeable future. Take a look 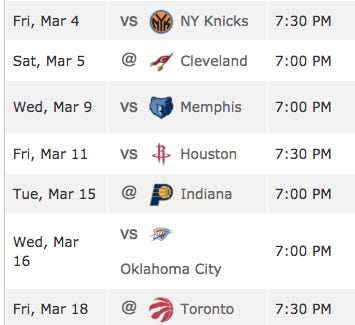 If the Celtics want to be for real, they’ll go 5-2 (not losing to TOR). That’s a tough stretch to start the month of March, and they’ll have to play some of their best basketball of the year to win some of those games. Watching this team though, something tells me they’ll be up for the challenge.