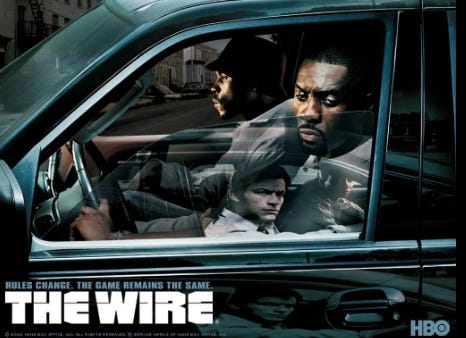 Spring Training games starting off this week really got me itching for some O’s baseball, got me thinking about another great thing about Baltimore, The Wire. I took it upon myself to matchup some of the Orioles and their Wire counterparts. This wasn’t the easiest to do, but I think I nailed most of them. Making this list also gave me a reason to rewatch some of my favorite clips from the show.

WARNING-SPOILERS, BUT THE SHOW HAS BEEN OFF THE AIR FOR 8 YEARS SO IF YOU HAVEN’T SEEN IT, IT’S NOT MY FAULT…. 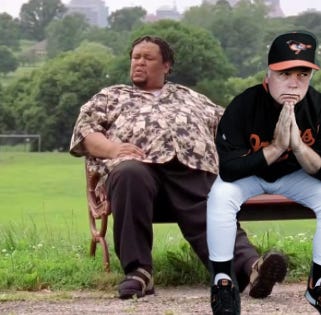 This comparison was perfect. If you needed something, you came to Joe. Much like Showalter, he knew everybody, and was respected by all. Joe knew how to get things he wanted, no matter what it took. Joe always tried to stay peaceful, and stay out of the violence, kind of wanted to stay out of view and observe from a far, much like Showalter does. You don’t want to get on their bad sides though. Prop Joe had a good run to the end, and was one of everyone’s favorite characters, much like Buck, you can’t find someone who didn’t like Joe. Both these guys have a way with words, so you have to really listen to hear what they are trying to say. 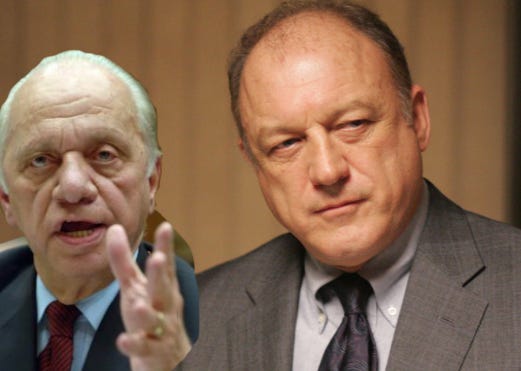 This was one that was pretty easy for me. I’m not sure I’ve ever met a Wire fan who likes Rawls, much like Orioles fans with Angelos. Hard nose guys who don’t deal with any bullshit at all. Rawls doesn’t care who you are, what case you are working on, or your rank, that man will rip you and put his nose all up in your business, much like the owner of the O’s. They are both always right, have never ever been wrong. It’s their way or the highway. Now Peter Angelos has never been spotted in a gay bar (to my knowledge. Also it is one of my favorite easter eggs in the entire show), but every other comparison is spot on. 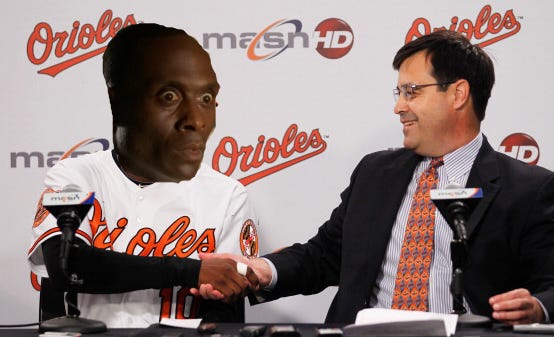 This was one of the first ones that jumped to my mind, for a few reasons. #1, they are both weird looking. Duquette always looks like he just rolled out of bed, threw on his suit, and Daniels reminds me of a taller Sam Cassell, dude looks like an alien. #2, it seemed like they always want to get out when they could, when they couldn’t leave, they did the best with the rag tag group that they had. Daniels just wanted to leave and get out, DD wanted to go to Toronto. Much like Duquette, Daniels was given a group of misfits when he first got here, and got the best out of them. 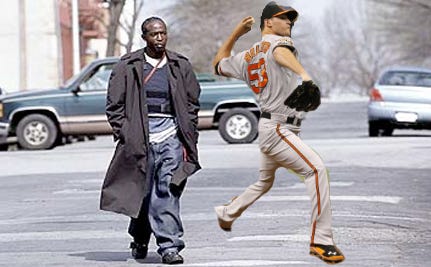 The famous stick up man from Baltimore, the one who clears the streets when he whistles, and he makes grown men run in fear. Always the scariest dude on the block. That is what Zach Britton is. I’ve seen some of the best hitters in the league piss their pants when they see Britton trot in from the dugout. The only thing that would make Britton better would be if he changed his warmup music to Omar’s famous whistle. Everyone knows Omar’s weapon, that big old shotgun, and everyone knows what Britton’s weapon is, that big heavy breaking ball. Batters say the breaking ball is so good it should be against the rules, but it’s all in the game. Hopefully Britton doesn’t meet his match buying some newports, soft-pack. 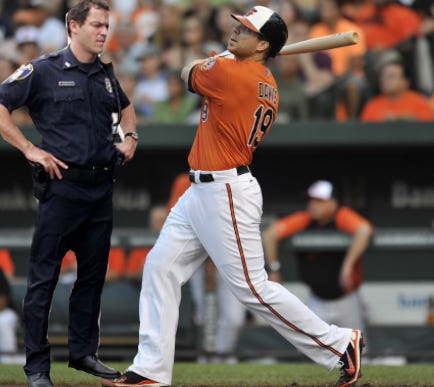 Chris Davis is the perfect McNulty. Sure he’s not banging waitresses and crashing his car at 4 am while hammered drunk off Jameson, but Davis does have his imperfections. His suspension for adderall in 2014 comes to mind, as well as his mind-blowing strikeout numbers each year. But you know what, Davis always comes back, just like McNulty. Rawls thinks he can stick Jimmy on a boat under the Key Bridge? Wrong, he’ll catch a floater. Davis is 0-4 with 3 Ks heading into extras? Doesn’t matter, Davis will go yard to end the game. Even with their flaws, they always bounce back and make a big impact. Jimmy gets kicked off of cases, still finishes them. Davis rebounds from his suspension, and has another great year. Both has histories of challenging “Chain Of Command”, McNulty going behind pretty much everyone’s back, and Davis often rearranging the lineup to bat himself lead off before Spring Training games, SMH. But no matter what, they’re always there in the end. Much like McNulty, after Davis does something bad, you’ll find someone yelling at him, and Davis asking “What the fuck did I do?” 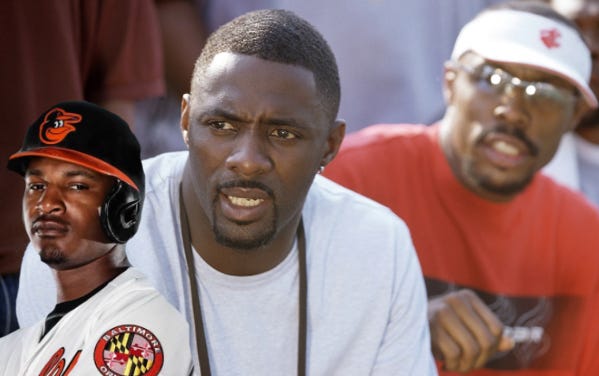 I had to put Jonesy as both Avon and Stringer. Avon Barksdale is the street smart, kingpin that runs Baltimore. His every move is being monitored by someone, he believes in one thing, running the streets. Much like Jones, who will do anything to make the catch, run into a wall, dive head first, he does it all, and everyone respects and looks up to him. Stringer Bell is the smarts of the operation, the business man. He handles the funds, as well as “The Pit” where the younger guys learn their place, much like Jones tutors the younger Orioles. Adam is the best of both worlds with these guys. Jones had to be these two guys because for how important they are to The Wire, Jones is that important to the club. West Baltimore would have been much different without Stringer and Avon, just like the Birds would have gone in a bad direction if Jones never appeared in Black and Orange. Jones had to be both the big boys, plus, he’s big on the Sunday Truce. 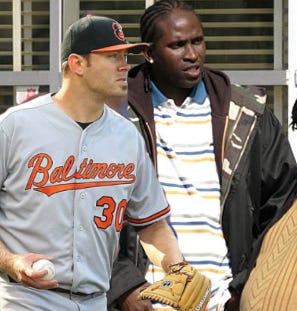 Tilly as Slim Charles is another easy one, not because they are both 6’10”, but because Tillman is the “ace” of the club. Slim is the top lieutenant of Prop Joe, a loyal solider who respects his leader and fights for him.  Sounds like an ace to me. Both these guys kind of came out of nowhere to help their commanders. Slim and Tillman don’t talk much, but when they do, they got that deep, intimidating voice that makes you listen. They don’t have the best supporting casts, but they get the job done with the guys around them. Slim is an undercover great charter, lots of good quotes by him. 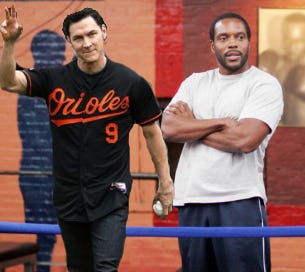 Brady is back in the game! Much like Cutty, Brady was out for a while, but he’s back with an upper management job with the O’s, and more jacked than ever. He’s helping to whip these young boys in shape, and try and keep them right. Everyone has a story about Brady that they remember when they were younger, just like how Cutty remembers Bodie and the others when they were young. Took them awhile to get back to their origins, but we’re sure glad they came back. Plus, all the moms want him, you know it. 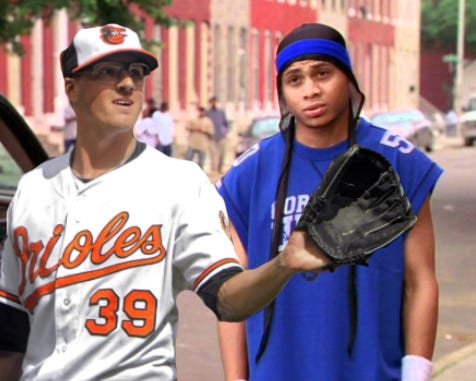 The youngster, the one everyone seemed to like, even when he couldn’t quite get it together. You could see that he had a bright future ahead of him, just had to figure out a way to put it all together. He started as just another guy starting from the bottom, but you saw something was different about him. Even when he wasn’t doing well, and looked like he was lost, the older guys got him back on track and got his mind straight. Gausman is perfect for Bodie, just have to hope that is anyone runs up on the corner, he is smarter about it this time. Both the character and the player are top 3 favorites for me, a great character and a great future pitcher. 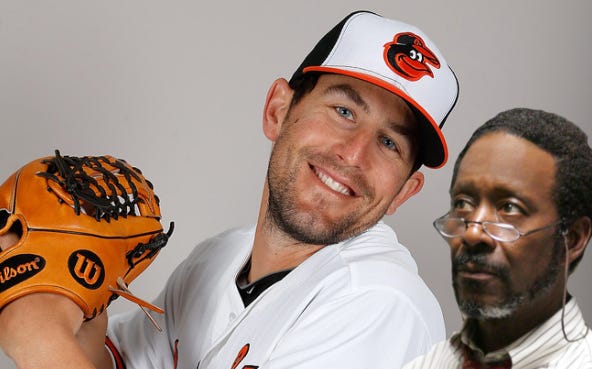 The crafty vets who aren’t loud or flashy. Both guys come to work, do their job, and thats it. Oh, and they are some of the best at their position. O’Day being one of the top relievers, and Lester being one of the best detectives in the land. These guys are smarter than anyone else out there, and use that to solve their problems. Who figured out Marlo’s clock messaging? Almost as impressive as O’Day getting out of the bases loaded jams. The young guys would be smart to stick by these guys sides and learn everything they can.

Got part 2 coming up a little later, feel free to shoot over a tweet to me and let me know what you think of the list…@BarstoolRDT