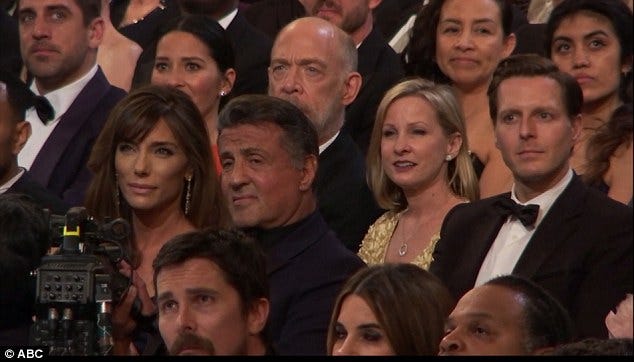 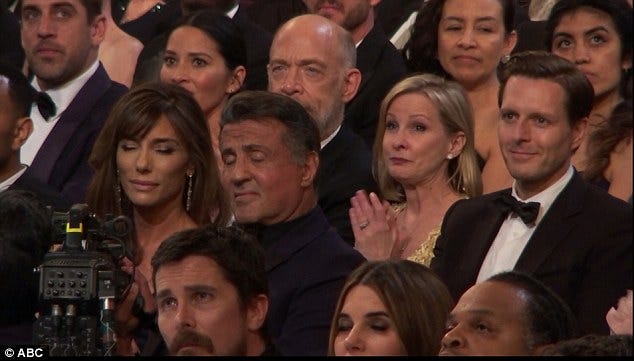 2002. The young Eagles clinch home field advantage throughout the playoffs a year after almost upsetting the much heralded St. Louis Rams in the NFC Championship game. After a first round bye, they steamroll through Michael Vick and the Atlanta Falcons who just beat up on Farve and the Packers in Lambeu. The stage was set to play Tampa Bay, a team who had never one in under 30 degree weather, in below freezing temperature at home for a trip to the team’s 2nd Super Bowl in franchise history. The Eagles had already whipped up on the Bucs earlier in the year and the same team in the 2001 playoffs. It was the last game at Veteran’s Stadium. It was destiny.

Anndddd the Eagles lose 27-10. Similar shit, different year for Philly. Stallone was basically a guaranteed LOCK to take down this award for his (most likely) final portrayal of one of the biggest icons in movie history. Sly KILLED it as Rocky. Not the Commie killing, robot owning, sauced up and sexually repressed Rock we all know and love, but as the true Rocky Balboa from the original film. He brought shit back to basics and made the character real again. He deserved the accolades and everyone knew it. And what happens? Some squirrel from Spielberg’s worst effort since Indiana Jones And The Kingdom Of You Might As Well Skullfuck Me gets the statue. So Philly it hurts. If Rocky was from Boston, NYC, Chicago, LA, or freaking East Jabip, Stallone would be sleeping next to his Oscar as we speak.

At least Sly has Arnold awkwardly giving him unnecessary positive messages via social media. You can cut the sexual tension with a knife.