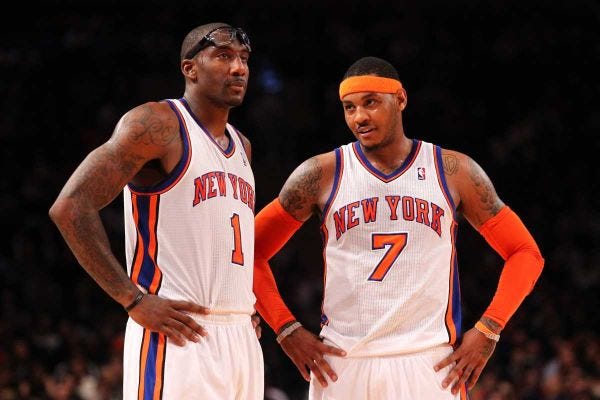 NY Daily News-  Amar’e Stoudemire is depressed about the state of a franchise he left in the hands of Carmelo Anthony.  Making his first appearance at the Garden since he was bought out by the Knicks a year ago, Stoudemire tossed some thinly-veiled shots at his former teammate Sunday night while discussing Anthony’s game, leadership and the departure of Jeremy Lin.

“It’s been a lot going on and it hasn’t really been great over the years,” the Heat center said before scoring eight points in a 98-81 victory over the Knicks. “It’s hard for me to watch from the outside looking in because I was so involved with creating a positive atmosphere around the Knicks. Now it’s gone the opposite way.”  Stoudemire made his most biting remarks when asked about Lin, whose run of short and unparalleled popularity was accompanied by rumblings of disapproval from Anthony and J.R. Smith, in particular.  Stoudemire took it a step further and indicated jealousy was the reason Lin — now with Charlotte — wasn’t re-signed.  “Everyone wasn’t a fan of him being the new star,” Stoudemire said without mentioning specific players. “So he didn’t stay long. But Jeremy was a great, great guy. Great teammate. He worked hard. He put the work in and we’re proud of him to have his moment. A lot of times you gotta enjoy someone’s success. And that wasn’t the case for us during that stretch.  “You got to enjoy that. You got to let that player enjoy himself and cherish those moments. He was becoming a star and I don’t think everybody was pleased with that.”

Anthony was annoyed this was brought up four years after the peak of ‘Linsanity,’ but expressed confidence Stoudemire was talking about other players. He referenced his acceptance of New York’s latest sensation, Kristaps Porzingis.  “If that was the case, I’d be upset right now with K.P.,”Anthony said. “I doubt he’s talking about me. I highly doubt that.”  Stoudemire, when asked if he sympathized with Anthony amid all of the Knicks’ losing, took his answer in a direction that highlighted the negative traits associated with the Knicks All-Star.  “When you get involved in this situation, you have to take ownership of it,” Stoudemire said. “You have to make sure you made the right decisions for your team and teammates. You have to become a complete player in order to bring your team out of a rut. Everyone can’t do it.”
Hey Amar’e, what the fuck bro? The last thing in the world I needed during this wretched streak of Knicks losses and bizarre Zen Master tweets is a reminder that Carmelo Anthony isn’t the answer and how fun Linsanity was before it died and led to the return of Raymond Felton. We are all pretty sure that Melo hated Jeremy Lin. And we know that the state of the Knicks hasn’t truly been good since the 90s. And even though you didn’t mention it, we will ALWAYS remember that this is our owner.

Then again, it’s great that Amar’e is remembering all the good times he had in New York. Like those first 50 games or so. They were like JFK’s first 100 days in office. The 30+ point game streak. MVP chants. Amber Rose rumors. Everything was fucking gravy. No talk about the injuries, fire extinguisher fights, or red wine baths. Actually the red wine baths were pretty great, but the point remains. I just hate that Amar’e had to remind me of Linsanity. So much fun. So randomly out of the blue. An unknown player coming out of nowhere to get buckets while the mainstream media toed the line between veiled racist and blatantly racist puns and headlines.  And then Lin got hurt, pissed off Dolan by accepting the poison pill contract, and disappeared to Houston, bounced to L.A. and is now some wacky hair sideshow in Charlotte.  Those days may not have been great, but at least they were fun.  And while Melo seems to be cool with Porzingis, this is a different Melo.  This is four years older and seems to be breaking down a bit Melo.

Now we have a Latvian basketball god, a couple of above average veteran pieces, an aging star, and a couple of young guys with potential that don’t play neeeearly enough minutes because Kurt Rambis likes to give Jose Calderon and Sasha Vujacic more time on the court. Shit never seems to get better with this team, it just gets different. And unless Phil Jackson can log off Twitter long enough to fix what’s wrong with this team (except the owner, which is unfortunately the biggest problem this team has), we are fucked.

We now return you to your regularly scheduled cryptic #STAYME7O tweet.