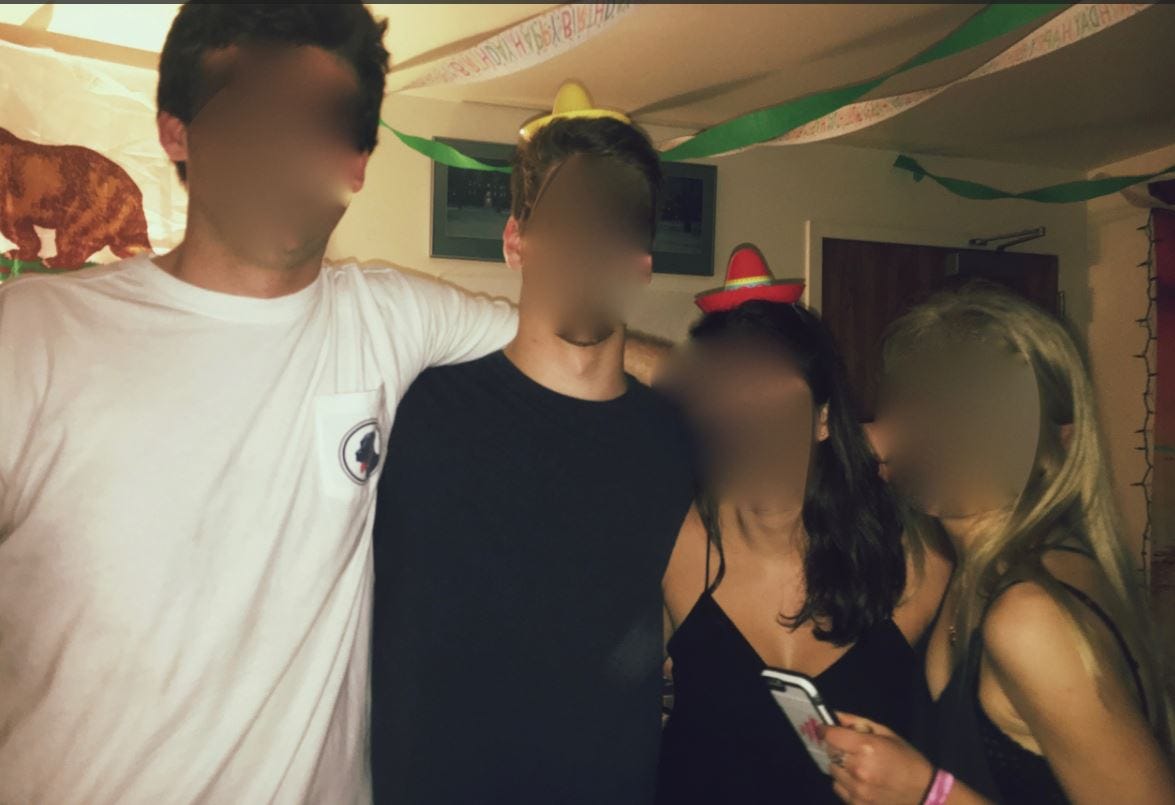 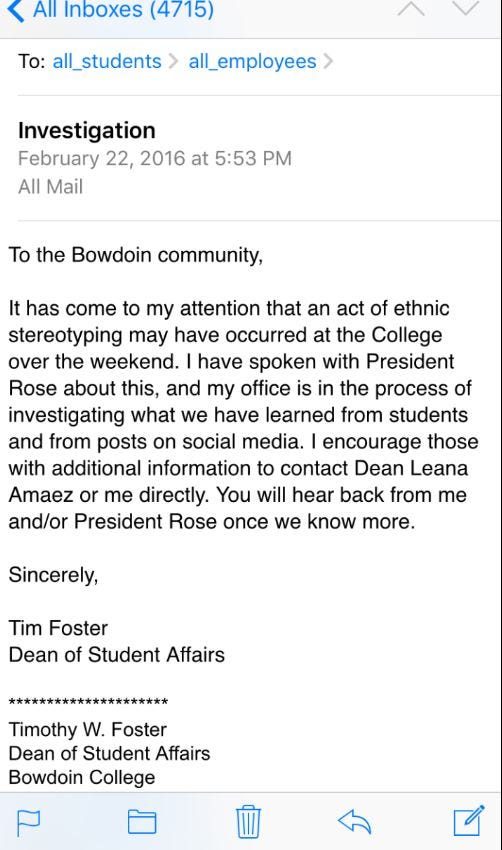 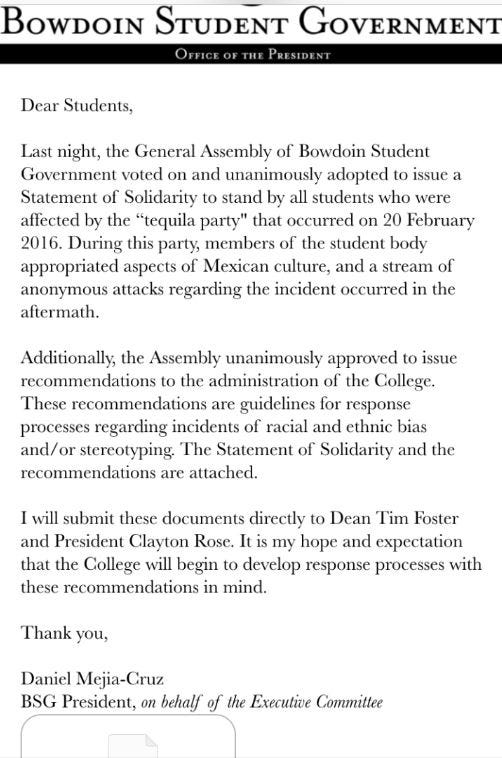 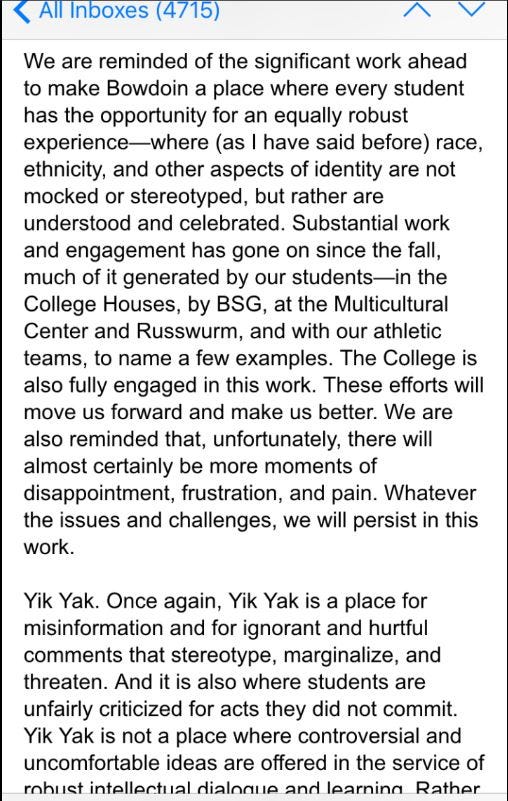 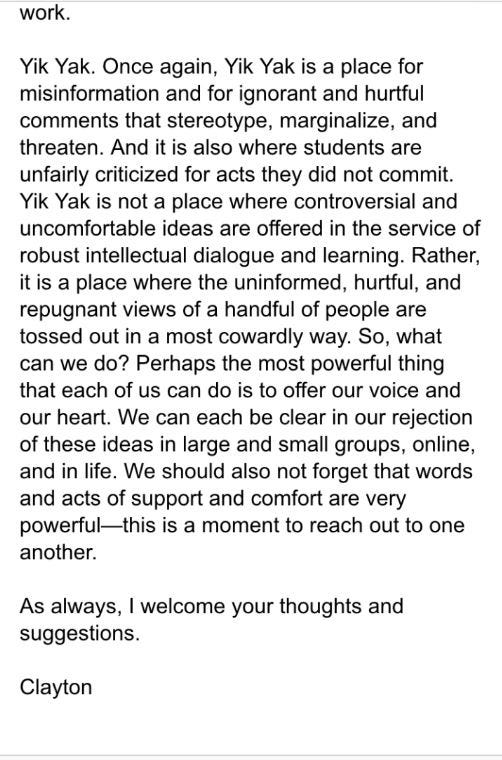 My friends and I are currently sophomores at Bowdoin College in Brunswick, Maine. We enjoyed our first year here, but recently we’ve found ourselves right in the middle of an authoritarian takeover by PC culture and its crooked army. The most recent event occurred last Saturday night, Feb. 20th, where a group of girls threw a surprise party for their friend, with the theme of the party being “tequila”. I attached a picture of the email invitation that was sent out before the party. Anyone with half a brain can see that there was no malicious intent or hatred from the author (who, by the way, is half Columbian). Nonetheless, the Bowdoin administration is now having an official “investigation” into this act of “cultural appropriation”. We’ve received 3 school-wide emails from deans and our president, and there have been several “safe-space” opportunities on campus for students to discuss how they were hurt and offended, one of which was restricted only to students who “identify as Latinx”. Our student government even unanimously voted to issue a “statement of solidarity” to the students who were deeply affected by these events, and also advised the school to be sure to provide assistance academically and socially to those students who were “injured” by these “attacks”. All this just because the theme of the party was “tequila” and a picture was posted on Instagram of a few kids wearing small sombreros. I know that the majority of students on campus disagree with what’s going on here, but as soon as anyone disagrees they are declared a bigot and a racist, so this speech is quickly suppressed. There are a lot of stoolies on campus here too, but we have no way of sharing our opinion without being attacked by these PC rats. A few of the girls associated had to leave campus because of all the hate they received. We just want our administration and student government to know that there are a lot of people here that really disagree with them. Can you not drink tequila or wear a sombrero anymore if you aren’t Mexican? What do these people think they’re going to accomplish? The way they reacted to this mundane event is nothing short of bananas. I hope you find our situation as ridiculous as we find it, and we would really appreciate it if you could help us get our story out there.

It’s tough to put into words how stupid college administrators are.  All they do is spend all their time worrying about the dumbest shit ever. Just living in their little fake life bubbles trying to protect everybody from everything. It’s like one big nursery school. It’s bananas. Just last week Middlebury banned Red Bull because they said it promoted promiscuous sex and bad grades. Now we got Bowdoin on lockdown for a Tequila Party. A TEQUILA PARTY! I literally don’t even know how somebody could be pretend to be offended by this nevermind really offended. Like if you honestly give a flying fuck about a Tequila Party you should go volunteer at an old person home or big brother big sister program. You just haven entirely too much time on your hands. Instead of fake righteous indignation and getting mad about nothing you could spend your time giving an old person a friend.