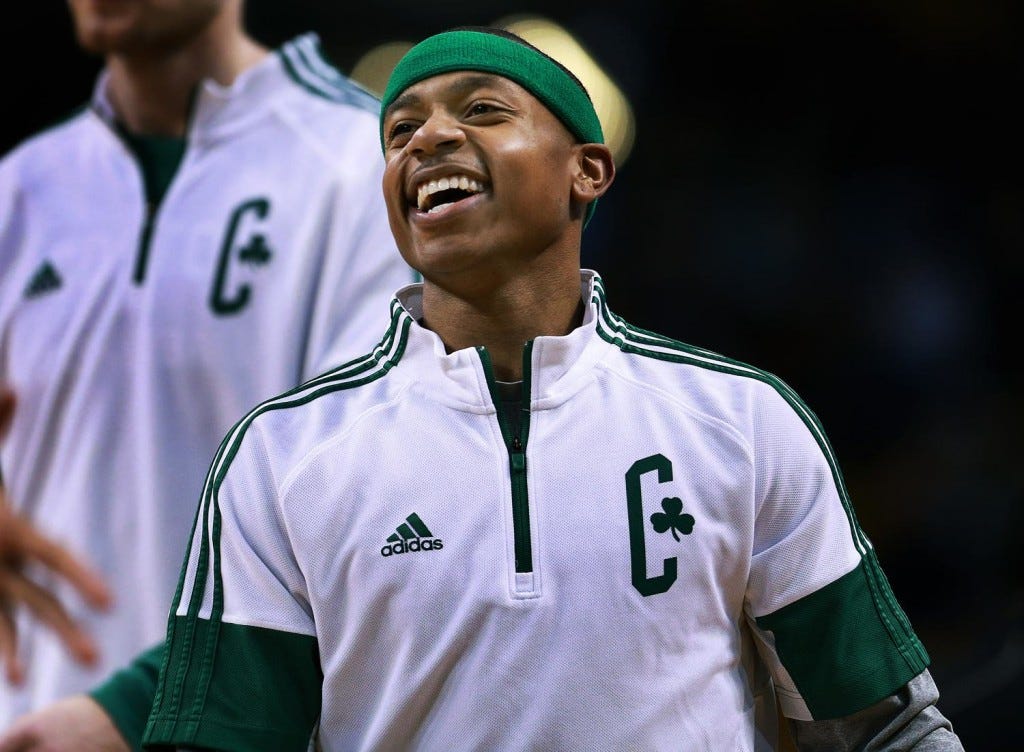 It’s Boston @Isaiah_Thomas we tell it like it is. You are not a foundation player. A very good player but not great. From the other guy.

Am I on a different planet? While it may not be the wisest move, let me attempt to refute these claims using nothing but reason. I have taken off my Celtics footy pajamas. Let’s just look at why this is the dumbest fucking thing I have ever heard, and why I have a few problems with it. You want to say you are just telling it like it is? Are we sure about that? You’re just being the big bad honest Boston media guy who keeps it real? Oy vey.

I understand your point. Him being short really is concrete. Can’t fix that. But maybe here’s the problem. Maybe the perception that Isaiah can’t be that player because of his height is BECAUSE YOU ARE CREATING THAT PERCEPTION. Maybe if you got past his height and realized what his actual production is, you would value him just like you do those other “franchise players”.

So please..allow me to tell you how it really is

– Isaiah’s 21.6 points and 6.8 assists on the season make him 4th in the NBA in PG scoring and 8th in assists. He also joins a club of 7 others (Curry/Westbrook/Lowry/Bledsoe/Walker…hmm some franchise guys in there) as the only guards in the NBA to average 20+ points and 5+ assists. Franchise player John Wall doesn’t even do that. Hmm.

– Isaiah’s PER of 21.4 ranks 8th in the among NBA PGs. How close is that to other franchise players? Well Kyrie Irving, someone I’m sure you both would rather have than Isaiah clocks in at a stellar 21.6. But…he’s taller! Hmm

– Thomas currently ranks 10th in the NBA among ALL players (not just PGs) in 4th quarter scoring. I think that means he shows up when it matters most right? That’s something you want out of your franchise player I would imagine. Isaiah’s 6.3 points come in higher than Westbrook, Butler, George, Wall, Griffin, Wade, Wiggins, DeRozen, Anthony…do I need to keep going? That enough franchise guys for you? So weird though since they are taller I know. When we look at just guards, incase you were wondering, Isaiah’s 6th. Hmmm

– Now we can all agree, you can’t be a franchise player if you don’t win right? If you aren’t helping your team win games then what the hell are you doing. So let’s take a look. The Celtics were 20-32 (.384) when Thomas first stepped on the court as a member of the Celtics against the Los Angeles Lakers. Since that moment, the Celtics have a 54-35 (.606) record. Now thats more than 82 games worth of evidence, I’d say that’s a substantial impact. Does that seem like the type of player that you could build around? Seems to be working no? Quick question, do you think guys would rather play with Thomas or Harden, just wondering. Hmmm

– I don’t need to talk about how he willed a team into the playoffs that had no business making it, and then followed it up by carrying his team to the 3 seed just 80+ games into his Celtics career, with what I think everyone would consider a developing supporting cast. Do I? Hmm

So please, maybe I’m confused. Help keep it real for me. Are we not seeing someone who is performing at a franchise player level performance. Or certainly as well as other players who you both would probably consider a good idea to build your team around? Is Isaiah Lebron James or Kevin Durant, of course not. But who is? It’s straight up embarrassing that you have a superstar player right under your nose and you refuse to acknowledge it because the dude is short. That’s telling it how it is?

PERHAPS, you could use your platform and your influence to help change that narrative. That you know what, there is actually something pretty special happening with this player, and he deserves proper credit. You take the low hanging fruit, I get it. Someone needs to play that story line but do not get it confused. You do not speak for me. You do not speak for Celtics nation. You do not speak for Boston. Neither do I. I just know a fucking stud player when he’s staring me in the face.

And you know what? Nobody is angry Joe Johnson isn’t a Celtic. Is that a serious statement? We just witnessed Isaiah Thomas hit THREE big time pressure filled shots to WIN A GAME. Maybe you were busy and didn’t see, that’s OK I wrote a killer write up about it. There is not a Celtics fan in this city, or on this planet that is sitting at home right this second and is sad that he now has to deal with Isaiah Thomas taking his game winning shots. What a crock of shit.

And another thing! You think this is helping us look good as a city and as a fanbase? You think some Player X is looking at you blatantly disrespect your best player all because of his height and thinks to himself, yeah, that’s who I want to play for! Why would they want to come here and deal with that? You don’t think that matters? For the love of christ guys we are trying to looks GOOD to people. Saying such bullshit on television is going to have the exact opposite effect.

Was that too real?