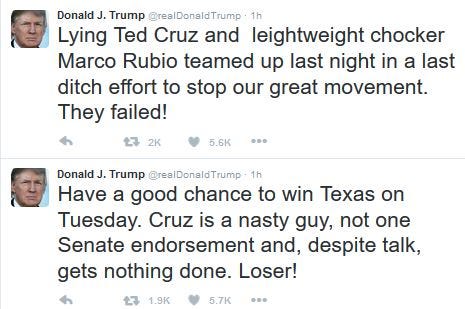 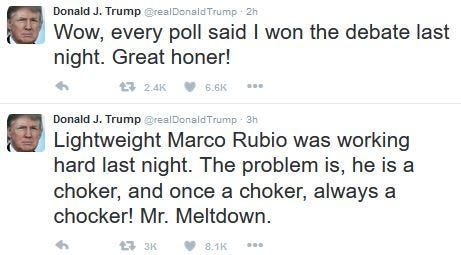 This is how you do it.  This is how you win the Presidency of the United States.  All these political pundits and experts who try to analyze politics don’t get it.  We are in a new age.  We are in the digital age and Trump is the only one who knows how to leverage it correctly.  It doesn’t matter who won the debate last night.  It matter who thinks they won the debate.  It matters who wins the post debate smack talk.  I honestly can’t remember anything that any of the candidates said last night but I know Ted Cruz is a basket case and a lightweight choker.   I know Rubio said “peed” like he’s still in junior high and is Mr. Meltdown and looks like a little boy.   Fuck those guys.  Can’t have them in the oval office.

PS – Yeah I know Trump made a bunch of spelling mistakes.  That’s because he loves the uneducated and is appealing to them.  Plus it’s just a known fact spelling and memorization are the lowest forms of human intelligence.