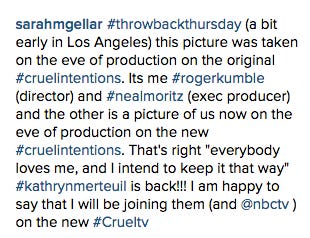 Hollywood Reporter – NBC’s Cruel Intentions reboot will feature one of its main original stars. Sarah Michelle Gellar, who starred as Kathryn Merteuil in the 1999 feature film, announced Wednesday that she is returning for the NBC pilot. Gellar will be a series regular should the pilot move forward. The pilot’s Kathryn is described as a master manipulator who easily hides her self-serving machinations behind a facade of charm, poise and warmth. The woman behind the scandal involving Bash’s mother, Annette Hargrove, Kathryn is now married to the wealthy Pascal Barrett and spearheads an inspiring youth rehabilitation movement, as well as being involved in a local private school. The stepsister of Sebastian Valmont, Kathryn is privately shaken by the arrival of Sebastian’s son, Bash, and the reappearance in her life of the girl she wronged years ago, Annette Hargrove Casey. A force of nature, Kathryn has many secrets in her life.

The picture that changed every 13 year old boy’s life: 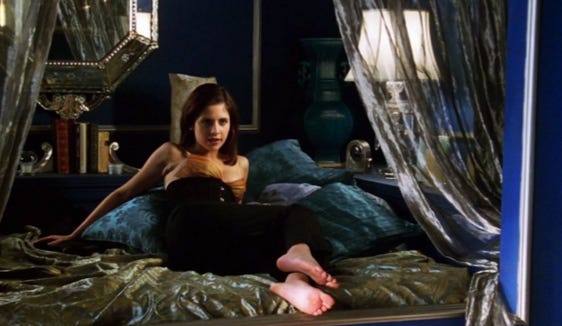 If you’re my age and had premium cable channels in middle school, this movie was everything. Between Howard Stern (and Wild On) on the E! Network, and watching Cruel Intentions on days I was sick from school, I learned more about life and love than anywhere else. And Sarah Michelle Gellar was the original bad bitch.

I remember watching this movie and being amazed by what was going on. Sex, drugs, all of it! And Ryan Phillippe’s character became my hero. The way he manipulates Reese Witherspoon, it’s awe inspiring. You can go back and watch this movie now and still take life lessons from his character, just a magnificent job of fucking with that prude.

Sure, Sarah Michelle Gellar might be a little past her prime, but she was made for this role. She also is one of those actresses who should have been much bigger than she ever got. Instead she did weird Scooby Doo roles. This is the comeback she needs.