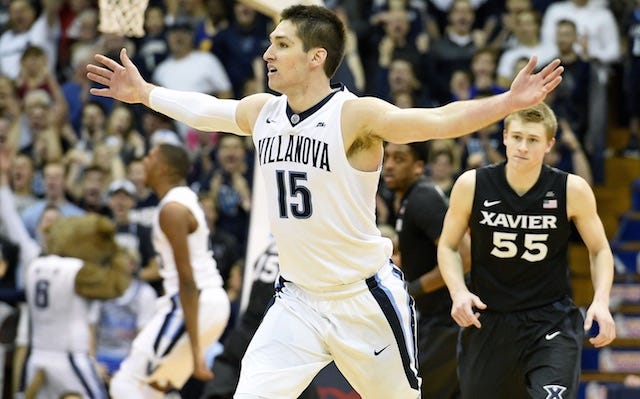 Everyone wants to complain about how it’s not the old Big East. Look, I get it. The old Big East was awesome with big time coaches, players and basketball schools. But, it’s all something we can’t have again.

Until tonight. No. 1 Villanova taking on No. 5 Xavier, in what will remind people a little bit of the way the Big East used to be. Despite tournament struggles the last two years, Jay Wright is still one of the more respected coaches in America and Villanova has turned into a top-20/25 program in the country. They have a star in Josh Hart, a big time freshman in Jalen Brunson and everyone’s favorite gritty player Ryan Arcidiacono.

On the flip side you have Xavier, which has always been a little underappreciated as a basketball school. Chris Mack is one of the best young coaches in America and has a deep team with a big time player in Trevon Bluiett.

So, tonight at 7pm, turn on FS1 and get ready to watch a good game. For anyone who says ‘but Reags, Nova won by 30 on New Year’s Eve,’ kindly get fucked. When Edmond Sumner was carted off the court 2 minutes into the game, there was simply no chance for Xavier to win that game. Don’t believe me? Jay Wright agrees, telling Villanova’s website: “As soon as (Sumner) went down it was shocking for all of us and it really affected them. And we just started making ridiculous shots. It was just a surreal day.”

So, what’s there to look for tonight? First off it’s how Xavier decided to matchup with Villanova. Nova will be undersized as normal with Kris Jenkins – standing at 6’6” – lined up at power forward. Xavier will actually get to play their best lineup – putting four shooters around Jalen Reynolds to start the game. Mack has screwed around with his starting five the last five games, but you’ll see Abell, Bluiett, Sumner and Myles Davis out there to start.

Both teams will run a similar offense, bringing their big guy up to set a high ball screen before diving to the paint. For Nova, they like to run a cross play after the dump into the post. If Josh Hart isn’t part of the cross, he’ll quickly dive opposite block to position for an offensive rebound or a quick cross pass from Ochefu.

So, how will Xavier try to defend this? By running their 1-3-1 we’ve seen more of lately. This will happen especially when J.P. Macura is in the game, who is 6’6” with a long wing span. Mack puts the sophomore or Sumner (6’5”) at the top of the zone and bring the pressure up to at least midcourt. It’s not necessarily a full-out trapping zone, but any time the ball goes near a corner you’ll see a trap coming. The other big difference about this zone? Mack typically puts Reynolds or Farr underneath to protect the rim and rebound instead of a forward like you see a lot of other teams do.

So, what’s going to be the key tonight? First, can Xavier control the open 3’s it gives up to Nova (shoots them on 44.5 percent per Field Goal Attempts. Second, can Xavier keep Hart off the offensive glass and on the flip side take advantage of Farr/Reynolds on their offensive rebounds. Then who wins the tempo? Xavier plays the 55th quickest in the country while Nova prefers to slow down the game.

Cintas will be insane tonight with FoxSports1 throwing everything it has at the game – doing pregame, half time and postgame live from Cincinnati. Xavier needs this game to keep the regular season title alive and finally beat Nova for the first time since joining the Big East. It’s going to be a helluva game from the tip and you for sure won’t see a 30-point game. Give me Xavier by 3.

Most Disappointing Teams This Year:

With LSU having yet another bad loss, I started to get asked what teams have failed to live up to expectations the most so far this year. This is all based on preseason hype and where they stand right now.

ICYMI: I sat down with former Kentucky player Jon Hood who was part of the same recruiting class as John Wall, Eric Bledsoe and DeMarcus Cousins. We talked about his recruitment process once Gillisipie got fired, a pushing match with Boogie and winning the national championship: