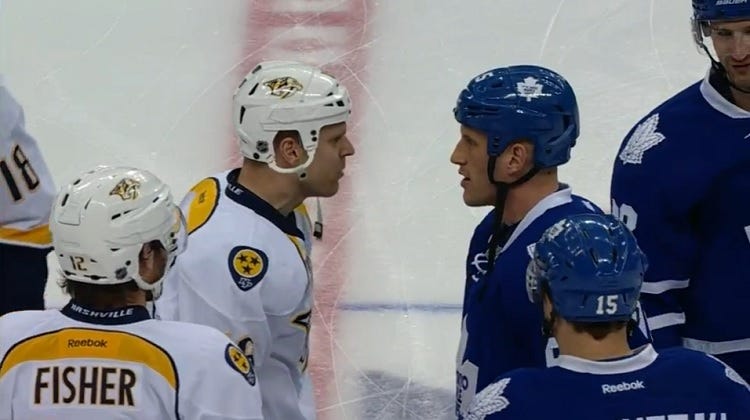 By now I’m sure that plenty of you are asking yourselves, “who the fuck is Rich Clune and who the fuck is Cody Bass”. As you should be because both of them are about as irrelevant as it gets. However, they are both a couple of goons and a sheet of ice is only big enough for so many of them. So Toronto and Nashville got underway tonight, the two decided to do some jawing back and forth during warm ups. The two have had some bad blood building up in the minors and it would appear that they’re not exactly the friendliest of combatants. So that’s what brings us to this. Quite possibly the best interview of the 2015-16 NHL season. The interview in which Rich Clune actually killed a guy.

“it’s just an on going battle with him. Every time we’ve fought, he’s always on the losing end. He’s wearing my number in Nashville now so I told him I’d rip that jersey off his chest if he was playing. But he wasn’t playing so”

I mean… I think somebody needs to go draw a line of chalk around Cody Bass because that son of a bitch is dead right now. I’m not a wrestling guy (don’t want to jump on Nate’s toes here) but that interview was a move straight out of the WWE. Fucking love it. Need more blood here. Need chaos. Need carnage.

And else where in the NHL tonight….