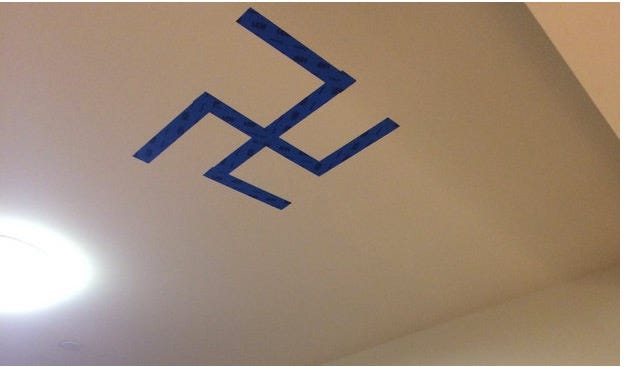 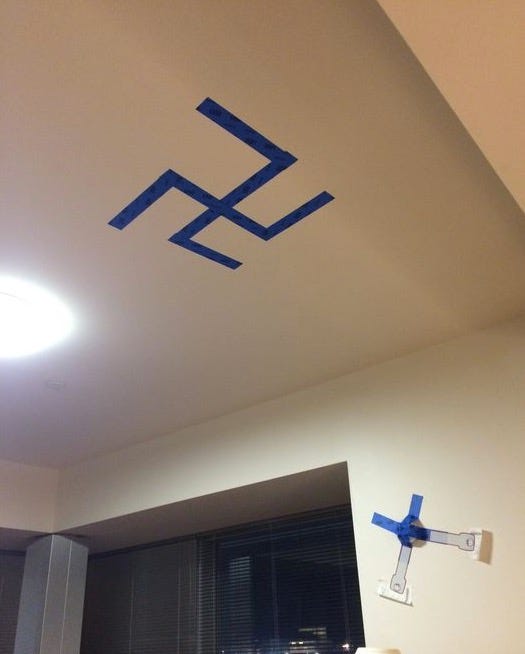 NEW BRUNSWICK — A Jewish student is outraged by the way Rutgers University handled an investigation into a swastika found taped to the ceiling in her apartment dorm room.

On Jan. 15, Rutgers senior Sara Rosen returned to her room at the Livingston Apartments after finishing a workout at the Livingston Campus gym. She walked in and saw a “huge swastika” taped to the ceiling right outside her bedroom.

According to a police report, later that evening officers responded to the apartment and spoke with the student responsible for taping the swastika to the ceiling. The student claimed it wasn’t meant to represent the Nazi’s swastika (or the Nazi Hakenkreuz), which faces right, but rather the Buddhist “sauwastika” — which faces left and is associated with peace. Police also spoke to the student’s roommate.

Rosen said neither of the students claimed to be Buddhist, and that the symbol was intended for her. She said there had been a conflict between her and the two students some weeks earlier, in which they brought a pine tree into the apartment despite Rosen’s request to remove it because of her allergies.

“This is all done as an act of intimidation toward me,” she said.

She said Rutgers dean of students Mark Schuster implied that “she was exaggerating,” saying the incident was “a joke gone bad.”

I’ll tell you what, you gotta respect the excuse game from this swastika taper. Just relentlessly excusing himself through this one.

The student who taped the symbol to the ceiling was reached for comment and pointed NJ Advance Media to a statement on Facebook from his friend who spoke on the his behalf.

“This is a person who has never once shown any hostility of any sort toward anybody, even when faced with situations that would have driven any other person (myself included) to anger,” the statement said.

The friend, who said he too was a Buddhist, added, “For us to see this only as a symbol of hatred and the Nazi party is to completely erase the long history of swastika and Buddhism.”

The friend added that the student “has not only been relocated from his Livingston apartment, but has also been ordered to leave on-campus housing altogether and had “talk among the authorities that they are considering suspension. All these sanctions, I will reiterate, are due to his taping a Buddhist swastika on his ceiling.”

Buddhism! Amazing. Keep banging that drum my man. You have a Jewish roommate who pissed you off by throwing out your pine tree because of her allergies…the next day you tape a swastika above her bed…oh excuse me, a “sauwastika”…riiiiightt.

Rosen said she was questioned by the Rutgers police officer about her relationship with her roommates, one of whom allegedly had made Hitler posts on Facebook prior to the swastika incident.

Listen Sara’s first mistake was thinking that college administrators give one single fuck about Jews on campus. They don’t. That’s just a cold hard truth we all had to find out the hard way. Not surprising in the least that the Dean basically laughed this one off. It’s just a swastika right?

Now if it had been a Confederate Flag on the other hand. Campus would be shut down for the next 2 weeks and the President of the University would have been hung in the middle of the quad. But a little old swastika? Get over it.